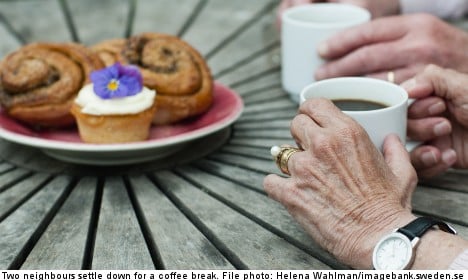 While nearly half of all Swedes would be open to having a 10-minute chat when bumping into a neighbour in the stairwell or on the street, only 15 percent of Britons said they’d do the same, a survey by Swedish insurers Trygg-Hansa reveals.

The survey also found that 70 percent of Swedes think it’s okay for neighbours to play loud music past midnight on a Friday or Saturday evening.

By comparison, only 6 percent of UK residents said they’d be as forgiving toward noisy neighbours,

“We Swedes have a reputation of being cold and aloof, a myth that this survey contradicts,” said Trygg Hansa spokesman Johan Eriksson.

“These figures show we are considerate and open, and that we really enjoy talking to our neighbours.”

The survey also asked what favours people thought were reasonable among neighbours.

One in three Swedes and one in four Brits think it’s reasonable to ask neighbours to water the plants or pick up the post, for example.

More Swedes also expected reciprocity of their neighbours for their bonhomie.

While 91 percent expected their neighbours to call them if a house or car alarm went off while they were away, only half of Brits would expect the same kind of vigilance from their neighbours.

However, UK residents were a bit more lax than Swedes when it came to how long they expected neighbours to hang on to borrowed items.

While 70 percent of Swedes expected neighbours to return items within a week, eight of ten Britons expected it to take three weeks before their items were returned.

All this openness fell to pieces, however, once the survey focused on the expectations of city-dwellers.

The 10-minute conversation in the stairwell, for example, shrunk to one minute for residents of both Stockholm and London.

The results are based on responses to online interviews with 3,435 Swedes carried out in September 2012, as well as the responses of 1,000 Britons from June 2012.