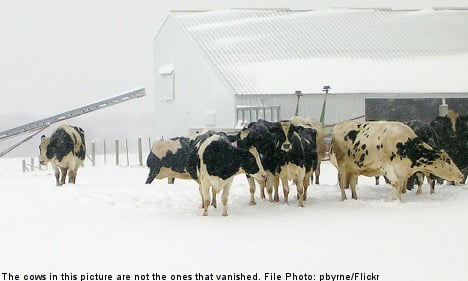 “The chance that this could have been something other than theft has been one of our theories ever since it was reported,” the police wrote in a statement.

“When I opened the gate I saw the animals were gone,” he told the Expressen newspaper at the time.

The animals went missing on the exact day they were due to be slaughtered.

Now, police are looking into the possibility that the owner may have been deceiving authorities in order to win big on the insurance claim.

“The person who made the police report has been taken in for interrogation and is suspected of aggravated fraud,” Fredrik Wallén of the Södermanland police told the TT news agency.

Officers are also hoping to get to the bottom of what actually happened to the animals.

The case garnered extra attention from the Swedish public when celebrity criminologist Leif G.W. Persson discussed the missing cattle on the television programme Veckans brott (“Crime of the Week”).

In the show, he wrote down his prediction of how events truly unfolded and sealed the note in an envelope to be opened if the case is solved.

Persson refused to comment on the case in light of Wednesday’s revelations.

“It’s now up to justice to take its course,” he said.