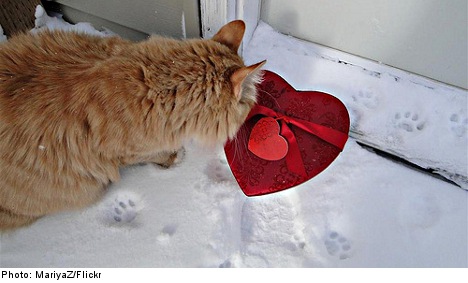 Finding romance abroad can be hard, something many single expats in Sweden know first hand. Different customs, different styles… not to mention different languages can all contribute to making it hard to hook up with that special someone.

While Valentine’s Day has been widely celebrated in the US and the UK since the mid-1800s, it was only in the 1960s when Swedes began to catch on to the commercial aspects of the holiday inspired by early Christian saints and cemented into the cultural conscience by Chaucer’s love birds.

According to a 2012 survey, roughly half of Swedes celebrated Valentine’s Day in 2012, with flowers being the most common gift given by lovebirds to show how much they care.

According to industry estimates, about 4 million roses are reportedly sold in Sweden on Valentine’s Day.

Of course, Valentine’s Day has been known to put many singles ill at ease, while others look at it as an opportunity to make a move on a day when romance is in the air.

The Local has been in touch with single expats in both camps for a fun-loving look at how Swedish men and Swedish women can make (or break) one’s dreams of Valentine’s Day romance.

IN PICTURES: Fine’s male point of view on Swedish Valentine’s

For American-born contributor Elisabeth Carlsson, February 14th is the one day out of the year that she has come to dread since moving to Sweden.

But Aussie transplant John Fine, on the other hand, has grown to wholeheartedly embrace Valentine’s Day after seven years of living in Sweden.

To find out why, click on the links above to find out whether you agree with each one’s Valentine’s Day views.