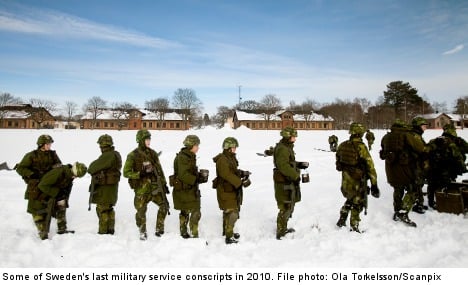 “Can We Defend Ourselves For a Week?” the Royal Swedish Academy of War Sciences (Kungliga Krigsvetenskapsakademin) asked in the title of its report, published this week.

The report echoed comments made by armed forces chief Göranson in the media in early January, when he said the country would only be able to hold off an attack for “about a week”, following repeated cuts to the defence budget.

Göranson has since been on sick leave for exhaustion.

The Academy’s study, conducted in 2011 and 2012, supported his analysis of the situation.

“We think the military does not have a credible ability to defend all of Sweden,” the report authors noted.

“In the event of a possible attack against Sweden, we would always need help from abroad.”

Göranson’s comments in January, timed in advance of the annual defence conference People and Defence (Folk och Försvar) in the ski resort of Sälen, reignited the debate about Sweden’s potential membership of Nato.

The report this week called for greater analysis of whether Sweden had the foreign backup needed in case of conflict.

“We think that the authorities should rapidly study the conditions and possibilities of obtaining such assistance,” it read.

“So that any potential crisis in the Baltic region can quickly be resolved, thereby avoiding any act of war from being undertaken.”

It further noted that the Swedish military’s increased engagement on foreign missions had shifted the focus away from domestic defence.

The report singled out the Baltic Sea island of Gotland, located between southern Sweden and Latvia, as particularly strategic and vulnerable.

It said, however, that “the military’s capacity for international operations is good, even excellent.”

In Sweden’s 2013 budget, the defence allowance accounts for only 1.2 percent of gross domestic product, a level that has been in continuous decline. In 2007, it was 1.5 percent.