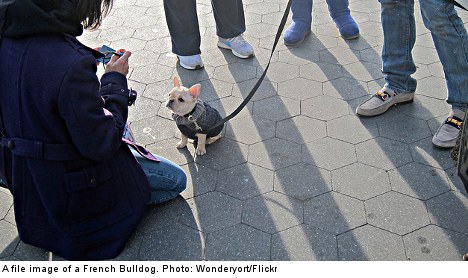 A 40-year-old woman reacted angrily when she saw the dog walker, 22, jerk the dog’s leash so hard the puppy lifted from the ground.

A picture that she took from the incident in central Malmö shows the small animal desperately flailing at the end of the leash, with its red collar digging into its neck.

She said she also intervened because the man kicked the puppy several times.

The man reacted angrily at being confronted.

“It’s my dog and I do what I want,” he allegedly told the woman before spitting in her face, according to a report in the regional Skånska Dagbladet newspaper.

When he walked away and again tugged at the leash, the woman took the picture of the pup dangling from its collar. The man returned and reportedly spat at her a second time before punching her twice in the face.

The 22-year-old was charged for animal cruelty, harassment, and assault in court on Thursday. He has denied all charges.

The puppy was taken into care shortly after the incident. The 40-year-old woman and two witnesses took note of the man’s address as he walked home, allowing the police to respond immediately.

The police records note that the puppy appeared frightened of its owner. It was also limping as its paws seemed not to have been cared for. The puppy also eagerly drank the water given to it.

The suspect, meanwhile, told the police repeatedly to stop being kind to the dog.

“He shouldn’t like people,” he reportedly said, before denying that the puppy’s sore paws were due to neglect.

“He fell off the sofa, I’d never hurt the dog, he’s like a son to me,” he said according to Skånska Dagbladet.

He also told the police that he lifted the puppy by the leash to “help it onto the pavement”.