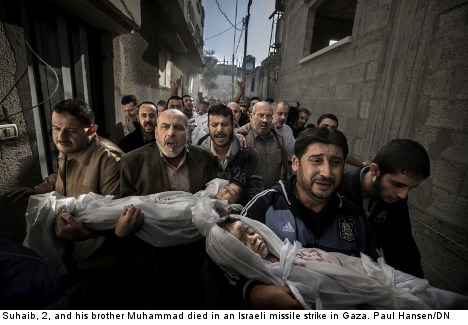 The staff shooter for the Dagens Nyheter daily took the image of the funeral procession carrying two-year-old Suhaib Hijazi and his three-year-old brother Muhammad down an alley in Gaza City on November 20, 2012.

“The strength of the pictures lies in the way it contrasts the anger and sorrow of the adults with the innocence of the children,” said Mayu Mohanna, jury member from Peru. “It’s a picture I will not forget.”

The children’s father Fouad was also killed in the air strike and their mother was put in intensive care.

AFP photographers Fabio Bucciarelli from Italy and Javier Manzano from the US won second and third prize in the Spot News category respectively with a series of photographs taken in Syria’s battle-scarred Aleppo.

One of Bucciarelli’s pictures shows a Free Syrian Army fighter standing on a rooftop preparing to fire a rocket-propelled grenade, while one of Manzano’s photos shows rebel fighters in a dark room pierced by sunlight streaming in through bullet holes.

“I am happy that I and many of the other photographers, including Javier Manzano, won prizes for their work in Syria and that people can see more images from there,” Turin-based Bucciarelli, 32, told AFP by telephone.

“I also want all the people to remember that there are some journalists who have died there for trying to cover the news,” he said.

At least 20 journalists have been killed in Syria’s civil war, according to a count by AFP and Paris-based media watchdog Reporters Without Borders, while the UN says the overall death toll is nearing 70,000.

Top winner Hansen will be awarded a cash prize of 10,000 euros and a camera during a ceremony in Amsterdam in April.