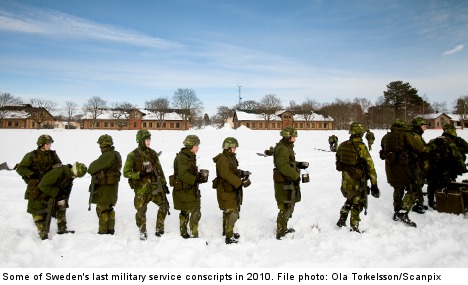 Sipri said on Monday that sales in 2011 probably dropped as a result of the economic crisis prompting budget cuts and cited scaled-back military engagement in Afghanistan and Iraq as additional factors.

The 100 companies’ total sales declined, including inflation, by 5 percent from the previous year, the first time a drop has been registered since 1994, the Stockholm International Peace Research Institute (Sipri) said.

“Austerity policies and proposed and actual decreases in military expenditure as well as postponements in weapons programme procurement affected overall arms sales in North America and Western Europe,” Sipri said in a statement.

Troop drawdowns in Iraq and Afghanistan and sanctions on arms transfers to Libya also played a role in the decline, it added.

Proposed austerity measures “have led some companies to pursue military specialization, while others have downsized or diversified into adjacent markets” such as security and in particular cyber security, the think tank said.

The Sipri figures do not include China due to a lack of reliable data. Chinese companies supply a military that thrives off the world’s second-biggest defence budget.

The list of top 100 arms-producing companies is dominated by American and European companies, which respectively hold 60 and 29 percent of the global market and together hold the top 17 spots on the list.

US group Lockheed Martin is number one, with sales of $36.3 billion in 2011, ahead of another US group, Boeing, and BAE Systems of the UK coming in in third place.

The think tank, which is specialized in research on conflicts, weapons, arms control and disarmament, was created in 1966 and is 50-percent financed by the Swedish state.

It defines arms sales as “sales of military goods and services to military customers, including both sales for domestic procurement and sales for export.”