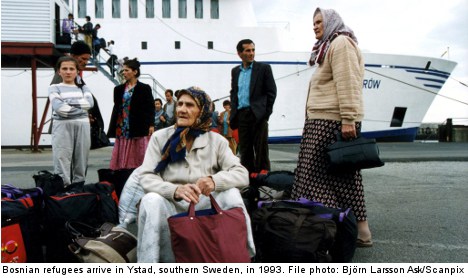 The comparable figure for the overall population of immigrants that arrived in Sweden that same year is 63 percent.

“I think the results for Balkan migrants would have been even better if there had been an earlier focus on jobs and linking employment with knowledge of the Swedish language,” Integration Minister Erik Ullenhag told the TT news agency on Monday when presenting the figures.

Many were fleeing what Ullenhag called “the most devastating conflict in Europe since the second world war,” as he presented an overview of Balkan refugees’ current well-being on Monday.

The review, put together by Statistics Sweden (Statistiska centralbyrån, SCB), examined the integration process by highlighting how an increasing proportion of refugees found their way into employment as the years went by.

After six years in Sweden, for example, 65 percent of men from the Balkans had found work. Four years later, after a decade in Sweden, that number had gone up by 9 percentage points to 74 percent.

For women from the Balkans, the hike between six years and ten years spent in Sweden was 15 percentage points – fom 51 percent to 66. Yet that figure then levelled out when looking at employment statistics after 15 years spent in the country.

For men, meanwhile, employment fell somewhat from 74 percent to 72 when comparing employment after ten and 15 years in the country.

The report also showed a clear link between education levels and employment, as the gap between Balkan refugees and workers born in Sweden widened considerably among those who had not finished their high school studies.

Only one in five of the Balkan refugees with only compulsory education were employed in 2011, while about seven out of ten people born in Sweden had found work – a 22-percentage point gap.

Employment figures for refugees with higher degrees was 79 percent compared to 91 percent among those born in Sweden, a 12-percentage point gap.

Furthermore, the report showed clearly that refugees who arrived in Sweden when they were young fared better than their older peers.

The integration minister said there needed to more focus on getting newly-arrived migrants to Sweden into the labour market quickly.

Ullenhag also said that integration efforts needed to be tailored to help migrants with lower education levels. On the other side of the education scale, he argued, Sweden needed to get better at benefiting from foreign-born academics’ experience and knowledge.

He further underlined that the discrepancies between men’s and women’s employment was noteworthy, and that integration efforts needed a clearer equality focus.