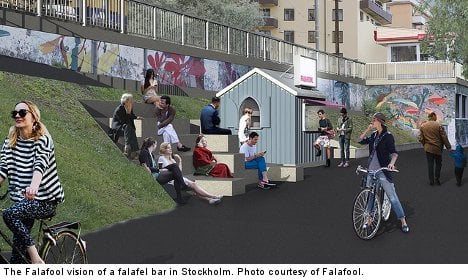 At first glance, the FundedByMe interface looks like sort of a citizen version of the “Dragons’ Den” television show, featuring a minimalist, Facebook-ish kind of feel. If an investor says he or she is interested in a product or idea, it pops up in the entrepreneur’s news feed.

Other would-be investors see it too. And they see if someone takes the final step – offering cash for a stake in the business, and other potential partners can even see the time it took interested investors to move from hitting the ‘I’m interested’ button to putting their money where their clicks were.

The timeline allows entrepreneurs to interact with potential investors by answering questions and sharing details.

“We help people create hype and help people tap into their social networks,” said Arno Smit, CTO at FundedByMe, one of only three equity crowdfunding websites in Europe.

Using the site, the brand Virtuous Vodka recently managed to raise 1 million kronor ($157,000) in equity, after offering a near 10-percent stake in the company. The process wrapped up in just eight weeks.

In traditional crowdfunding, friends, family and other fans are often offered short-term rewards for their support. For example, a photojournalist hoping to finance a documentary project will ask for cash injections and offer high-quality prints as a thank you.

Equity crowdfunding instead turns participants into actual share-holders in the company. And it allows would-be entrepreneurs to figure out what their ideas are actually worth.

“One of the hardest parts for early-stage start-ups is the valuation of a company, and being able to support your valuation,” FundedByMe explains on its site.

“By allowing our start-ups into an “pre-round” we provide them with the possibility to test the market, receive feedback, and engage with possible investors.”

A key component of the FundedByMe idea is to push the idea to the networks on different social media sites, and from there encourage friends, family, and other potential investors to promote the new company within their circle of friends.

“We create kind of a long-tail effect where people discover ideas through their contacts and through our site they can make an educated decision about whether they want to be involved,” said Smit.

Smit’s colleague and social media expert Wouter Veenstra explained how the new service is meant to make it easier for entrepreneurs to find investors in unexpected places.

“The idea is that even the man on the street can pitch in 800 kronor if he’s interested,” he said.

One hopeful is Nidal Kersh, Stockholm’s own “Mr. Street Food” who is known for pushing the vision of populating the streets of the Swedish capital with as many open-air food vendors as, say, New York.

And he sees a gaping hole in the Swedish market in the shape of fried chickpea ball.

“I think only Malmö has ever prided itself on falafel in Sweden, but for my family, falafels are in our blood,” said the young Swedish entrepreneur, who has Finnish and Palestinian heritage.

He now hopes to build a falafel hut, designed by architect Jakob Wiklander, in the trendy but semi-scruffy Hornstull Strand neighbourhood, on the fringe of inner-city Stockholm.

Kersh has managed to elicit an initial positive reaction from city hall. But once he had the politicians’ interests, the questions about how to finance the idea popped up.

Kersh had read about the case of Flippin’ Burgers, which was initially turned down by the bank. The eatery then raised a start-up sum through FundedByMe and went back to the bank for support, where the initially sceptical clerks decided to bankroll the restaurant after all.

“You know, banks are not venture capitalists, that’s not what they do, they need security,” Kersh said, underlining that his venture, dubbed Falafool, was still at an idea stage.

“It’s just air at the moment, but if you believe in the project it can become a reality,” he said.

“And the long-term vision to have a chain of falafel huts needs a structure behind it, and that’s where FundedByMe came in.”

The team at FundedByMe has seen cases where interest in a product or idea simmered for a time, then interest just exploded.

“Swedes are especially reluctant about being first, but once they see that someone they trust has invested, they are more likely to follow their lead with an investment as well,” said Veenstra.

A recent crowdfunding report by the Swedish Agency for Cultural Policy Analysis (Myndigheten för kulturanalys), noted that some observers worry there is a lack of “Anglo-Saxon donation culture” in Sweden, which could hamper crowds parting with their cash, even though it could do a world of good for Swedish start-ups.

FundedByMe, the report noted, is only one of two Swedish crowdfunding websites – the other being CrowdCulture.se.

Such challenges do not deter the boys at FundedByMe, who are also keeping a close eye on crowdfunding developments across the world.

Their focus has been on how to make FundedByMe keep its entrepreneurs on target – writing proposals, contacting investors, getting ready for the pre-round, etc.

“We’re like the personal trainer with a workout schedule reminding them what has to be done,” said Veenstra.

The site’s creators are also keen proponents of having active rather than silent investors take part in a product’s development. The importance of keeping stakeholders informed and encouraging them to be active participants is key, explained Veenstra.

“So Virtuous Vodka can tell its investors next time they go to a local bar to ask why they don’t stock the brand yet.”