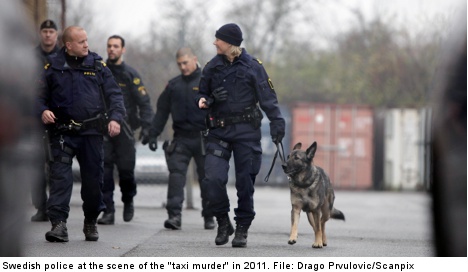 He has been on the run since a warrant was issued for his arrest just days after the November 2011 killing of the 31-year-old leader of the Brödraskapet Wolfpack gang (‘The Wolfpack Brotherhood’).

The suspected mobster was shot to death at a taxi depot in a Malmö industrial area and the 45-year-old, who had previously owned the taxi business, immediately came under suspicion.

But when the suspect finally showed up at a Malmö police station on Monday night to turn himself in after nearly 15 months at large, he was amazed by the response he received, the Sydsvenskan newspaper reported.

Upon ringing the bell on the door shortly after 6pm, he was informed that the police station was closed.

“Closed? I’m suspected of murder and a wanted man – you guys really want to get ahold of me,” he said into the intercom.

But instead of being let in to the station, he was instead directed to another police station. When he had made his way there, he was placed under arrest.

Swedish criminal justice expert Sven-Erik Alhem expressed his shock at how the Malmö police handled the wanted man’s attempt to turn himself in.

“It seems really strange and totally bizarre that he was told to go away when he’s suspected of murder. He must have been very confused,” Alhem told the Expressen newspaper.

Alhem added that, at the very least, an officer should have been sent down when the suspect turned up at the first police station.

The suspect’s lawyer was also critical of law enforcement authorities in Sweden for how they handled his client’s wishes to return to Sweden.

“It’s a little strange that a person who has been a suspect for such a long time and even expressed a strong wish to come home doesn’t get help but is required to come home on his own despite the existence of an arrest warrant,” defence attorney Gunnar Falk told the Kvällsposten tabloid.

His client maintains his innocence, telling Sydsvenskan he had “nothing to do” with the gang leader’s killing, which the Swedish media has dubbed the Malmö “taxi murder”.

“I’d be an idiot to come back otherwise,” he continued.

He is scheduled to attend a remand hearing on Thursday.

When asked why a man suspected of murder was turned away by the police station, a Malmö police commander cited ongoing renovations as one possible explanation.