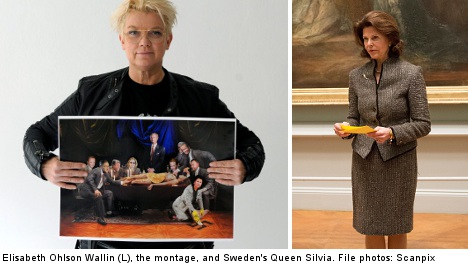 A photographic montage by Swedish artist Elisabeth Olsson Wallin showed the queen kneeling on the floor, seemingly about to scrub away at the swastika in front of her. In the background, the king and several other high-profile Swedes prepare to eat pizza from the naked body of singer Camilla Henemark.

The montage was first published by the left-of-centre magazine Tiden but was later republished by several heavyweight newspapers.

Tiden, Sydsvenskan, Aftonbladet and Expressen newspapers are all mentioned in the queen’s press ethics complaint, which was dismissed by the Press Ombudsman (Pressombudsmannen, PO) Ola Sigvardsson in December 2012.

She has now chosen to forward her complaint to the Press Council (Pressens Opinionsnämnd, PON), according to a report in Expressen.

Daniel Suhonen, the editor-in-chief and publisher of Tiden magazine, defended the artwork when the royal court reacted angrily to its publication last year.

“This is satire, it’s incisive and though it may push the boundaries too far, it is the job of satire to push boundaries,” he said, according to the TT news agency.

“The king is head of state and must be prepared to take criticism for as long as he is king. It is not our job to keep the king happy.”

The queen, meanwhile, has interpreted the montage to be accusatory, at least in conjunction with the headline that Expressen used at the time of publishing it.

“The montage in conjunction with the headline communicates the claim that Her Majesty the Queen has tried to conceal Nazism and by so doing tried to hide the holocaust,” the complaint reads.

The royal court has decided not to comment on the renewed complaint until the Press Council issues a statement, deputy press secretary Annika Sönnerberg told TT.