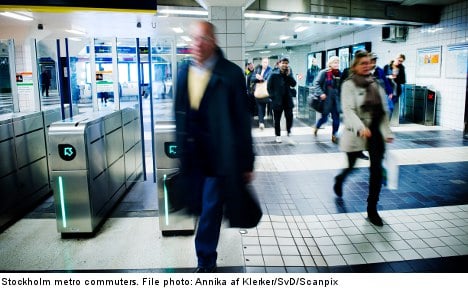 On Wednesday, Gonzalo Munoz, who was born and raised in Sweden by Chilean parents, was approached by a police officer while waiting for a friend inside a Stockholm metro station.

The officer spoke to Munoz in English.

“I’d like to see your passport because you are suspected of being in Sweden illegally,” the officer said, according to an account offered by Munoz to Sveriges Television (SVT).

When Munoz was able to produce his Swedish passport, the officer apologized and let him continue, but the incident nevertheless left him angry.

“And it feels like all of this work going on at Central Station is based on prejudice and racism, more or less.”

Munoz’s story is one of several that have emerged in recent weeks as officers have stepped up their efforts in cooperation with both the Swedish Prison and Probation Service (Kriminalvården) and the Migration Board (Migrationsverket) to find and deport illegal immigrants.

The name of the project, Reva, has been trending as a hashtag on the Swedish homepage of Twitter in recent days. Commentators from across the political spectrum have reacted in anger to stories of police engaging in questionable tactics to enforce deportation orders.

“This has turned the metro turnstiles into a life-threatening danger zone for the most vulnerable people in our society,” wrote a furious Maria Ferm, the Green Party’s migration policy spokeswoman, about the police action on the Stockholm metro system.

Centre Party MP Johan Hedin said police should be more careful in deploying ID checks, warning that police’s unwarranted controls “are not only a crime against good taste, but also against the law and should stop immediately”.

National police spokesman Sören Clerton defended officers’ methods, however, explaining police were simply following the mandate given to them by the government.

Activists, meanwhile, are tweeting to plot where the police are working on any given day. An informant network has also sprung up in other social media.

Since 2008, police in Stockholm have doubled the number of forced deportations in recent years, apprehending 2,154 illegal immigrants last year, compared to 1,071 in 2008, according to the police’s own statistics.

Ferm also pointed out that Swedish law allows police check only when there is a “well-grounded suspicion” that a person could be in Sweden illegally, and said a failure to respect the letter of the law would be paramount to racial profiling.

Her party has an at-times fraught relationship with the government, which invited the Greens to cooperate on migration issues to keep the anti-immigration Sweden Democrats out of the decision-making process in parliament.

Without the Greens, the right-of-centre coalition government would not have enough votes to legislate and the latest police actions have prompted her to question the government’s priorities.

The police, meanwhile, have defended themselves by saying they are simply acting on the instruction of lawmakers.

“We’re highly critical of the fact that the government has chosen to prioritize deportations and has given that mandate to police,” Ferm told SVT.