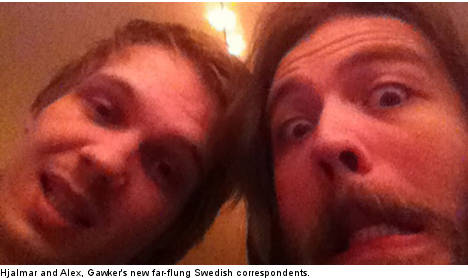 Gawker recently posted a job listing for a “scandal reporter” who must be prepared to “penetrate the personal and professional lives of titans of industry, finance, and culture”.

Among the responses was a 1,000-word application letter signed “Hjalmar and Alex”.

The two friends share a two-bedroom apartment in Nybro, a small town in the south east of Sweden which has a population of roughly 13,000.

The Local was unable to reach Hjalmar and Alex, but Gawker’s editor-in-chief John Cook said: “I think it goes without saying that they are very talented writers, chefs, and illustrators. We look forward to working with them.”

“I think I am writing this because I am bored but maybe with the tiniest inkling of interest in Gawker as an employee but lets start with this, I am a trained chef with no ties to journalism except of being very interested in world news and have my daily stops at; wired, gizmodo, Al jazeera, bbc.”

Hjalmar, who wrote the letter while “smoking a spliff”, went on to list his credentials, which include jobs as a pizza baker, a small-time drug dealer, a chef in training and a T.G.I. Friday’s burger flipper.

When Hjalmar moved from Iceland to Sweden his resumé became “worthless”, he claimed.

Alex, on his part, takes “fine wood works” classes at school and is learning to make “chairs, tables and other fine thinks”.

He has also reached level 63 in Guild Wars 2, the multiplayer online role-playing game set in the fantasy world of Tyria. His avatar is a “lion thief”.

Hjalmar and Alex attached three photos to their application – two of their “crappy art work” and one of themselves making funny faces.

They asked for three pictures in return – of Gawker’s fridge, rug and oldest staff member.

“It would be an understatement to say that we here at Gawker are impressed by your letter, intrigued by your ideas, and very curious about life in Sweden,” Cook wrote in a response to the aspiring reporters.

“We would very much like to discuss you writing for Gawker in a formal or informal capacity,” Cook told the roommates, and suggested that the “Nybro Action Team thing could work”.

Cook could not reveal what kind of stories the correspondents will be filing from Sweden in the future.

“We’re still in discussions with Hjalmar and Alex,” he told The Local.