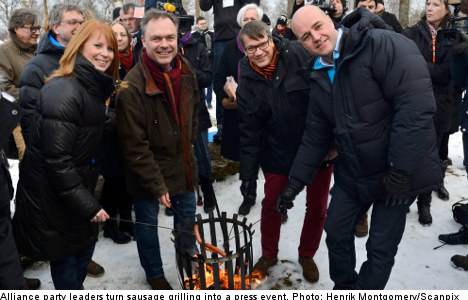 The Alliance government coalition was created ahead of Sweden’s 2006 elections as the conservative Moderate Party added parliamentary clout by teaming up with three smaller parties – the Christian Democrats, the Centre Party and the Liberal Party (Folkpartiet).

The team-up allowed the four parties to form a government after mustering enough clout to dethrone the Social Democrats, Sweden’s perennial political powerhouse.

On Monday, the four coalition partners began a day of strategy deliberations in Maramö by hoisting the orange “Alliance flag”, but neither Social Affairs Minister Göran Hägglund nor Enterprise Minister Annie Lööf could get it up – the cords were tangled.

And as far as securing a presence in parliament, neither of their parties would, if elections were called today, get it in.

Recent opinion polls show both parties below the 4-percent threshold for representation in Sweden’s parliament, the Riksdag.

As chats inside the imposing white villa wrapped up, the coalition partners said they would have a proper strategy meet for the 2014 elections at a future date.

The politicians then began grilling hot dogs in an orchestrated photo op, according to the TT news agency, which has been reporting from the 40-strong media mélé that has descended on the town in southern Sweden and far outnumbers Maramö’s 22 households.

“We are gathering our strengths to show that we want to win the elections together,” Lööf told the TT news agency.

“This is the first of a series of meetings we’ll have before 2014, in which we will organize how we work together.”

Her party has taken a beating after a controversial “ideas programme”, which in its first draft talked about free migration and polygamy. The political storm after it was released forced Lööf to fly home early from a holiday in Thailand.

An analysis by the Dagens Nyheter (DN) newspaper on Monday focused heavily on how Lööf’s support has dwindled, not only within her party but among supporters of her three coalition-partner parties.

Stenberg further argued that the Moderate Party threatened to overshadow its smaller coalition partners, a common analysis among political observers in Sweden.

“The smaller parties’ dilemma is that their voters do want the right-of-centre cooperation, which means they have to bite the bullet but try to find space to breath so they’re not suffocated under the weight of the Moderates,” Stenberg wrote.

The Aftonbladet newspaper chose to phrase the situation within the Alliance as follows: “The Moderates are munching up the little ones,” citing figures that showed that the tree smaller parties have lost half of their support since 2004.

Last week, the opposition accused the government of “infighting” and it appears many commentators agree.

Silberstein noted that another bone of contention concerns job insurance, where the three smaller parties are at loggerheads with the Moderates, lead by Finance Minister Anders Borg.

“The curse of governing as a coalition is weighing down on the smaller parties,” she wrote.

“If they stick out their necks too far they risk damaging the coalition’s image, but if they lie too low they’re no longer noticeable.”