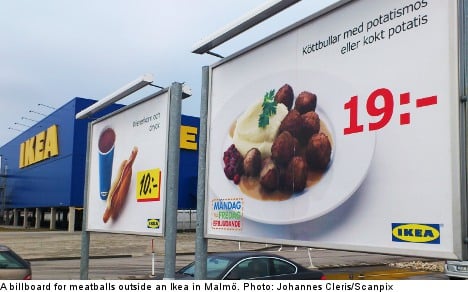 Ikea, most famous for its flatpack furniture, was caught flatfooted when it was dragged into Europe’s ongoing horsemeat scandal on Monday.

“It came as a surprise to us,” Ikea spokeswoman Anna Pilkrona-Godden told The Local following reports that food inspectors had found traces of horsemeat in frozen meatballs destined for sale in an Ikea store in the Czech Republic.

“We are treating the matter with the utmost seriousness. The quality of all our products is a top priority.”

Shortly after news emerged that Ikea-brand meatballs had been shown to contain horsemeat, the Swedish furniture giant halted meatball sales across Sweden and in 14 other countries across Europe.

While the meatball recall, as well as consumer concerns about the quality of food served and sold at Ikea stores, may provide the company with a short-term headache, branding experts say it’s unlikely that the Ikea brand will suffer any long-term damage in the wake of the horsemeat discovery.

“Strong brands are usually fairly resistant to these types of scandals. I would expect Ikea to bounce back from this,” Sara Rosengren, a senior fellow at the Stockholm School of Economics’ Centre for Consumer Marketing, told The Local.

The reports come amid an ongoing effort by the Swedish government to raise the country’s profile as a culinary nation.

Launched in 2008, the initiative aims to make Sweden “the new culinary nation in Europe” and appears to have had a desired effect, with Swedish food sales in the UK up by 30 percent in the last five years.

Ikea has also boosted its efforts to play a bigger role in food sales, deciding in 2011 to ditch many famous Swedish food brands from its stores in favour of own-brand Swedish food staples such as meatballs, pickled herring, and crisp bread.

Being dragged into Horsegate would not be the first time the furniture sellers are questioned. The company has also been hit with several scandals in the last year, including an admission that it had used prison labour in East Germany.

Ikea was also stared down for sexism after it was revealed it ad airbrushed women out of the version of its catalogue available in Saudi Arabia.

However, Rosengren explained that since the horemeat scandal isn’t limited to Sweden or Ikea, the discovery of horsemeat in Ikea’s meatballs won’t have a large effect on people’s perceptions of either, although Sweden’s efforts to become a “food nation” could take a hit.

“As Sweden is not quite as strong a brand when it comes to food, it’s possible that it might detract from efforts to raise Sweden’s culinary profile,” she said.

“But the connection is rather abstract, but I’d guess that perceptions of Swedish meatballs will be more affected than views about either Sweden as a country or Ikea.

“In the short term, people may not be as keen on Swedish meatballs as they were before. But in the long term, scandals like this tend to be forgotten.”

A key to ensuring that Ikea gets past the scandal is swift action, Rosengren pointed out.

“Ikea has to take it seriously and do something about it. But if it’s a one-off event and is handled with care, the long term effects will be limited,” she said.

Ikea’s Pilkrona-Godden said it was difficult to compare the severity of the horsemeat discovery with other recent scandals, but said the company wanted to maintain an “open dialogue” with consumers.

She emphasized that Ikea customers shouldn’t have doubts about the Swedish furniture giant’s ability to also provide high-quality food, despite the horsemeat discovery in Ikea meatballs.

“We acted quickly to stop meatball sales because we wanted to assuage any customer concerns,” she said, adding that the company is conducting further tests, the results of which are expected later in the week.

When asked whether she would eat Ikea’s Swedish meatballs, Pilkrona-Godden answered in the affirmative.

“Yes, I think I would. I feel totally confident about them,” she said.