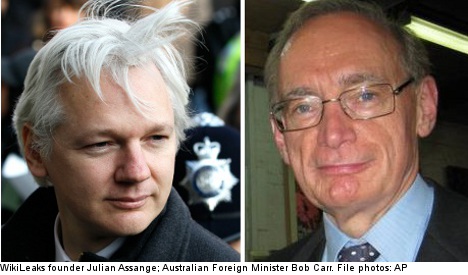 Assange has been holed up in Ecuador’s embassy in Britain for eight months as he seeks to avoid extradition to Stockholm over allegations of rape and sexual assault, creating a stand-off between Quito and London.

Carr told the Australian Broadcasting Corporation late on Monday that Assange, an Australian citizen, would be safer in Sweden than Britain.

“The Swedes say ‘it is our policy… that we never extradite someone on a matter related to military or intelligence’,” Carr told ABC television.

“To suggest that the Swedes are after him as a CIA conspiracy to get him to Stockholm and allowing him to be bundled off to Langley, Virginia (CIA headquarters) is sheer fantasy,” Carr said.

“If the Swedes had him in Stockholm it would be even more hard for the US to extradite, if that’s what they want to do, than he’s been for the last two years in the United Kingdom.”

Assange fled to Ecuador’s embassy in June after losing his legal battle against extradition to Sweden. Ecuador granted him asylum in August but Britain has refused to allow him safe passage.

Britain told Ecuador’s President Rafael Correa on Monday that it remained committed to finding a diplomatic solution to the case.

Assange founded the WikiLeaks anti-secrecy website that enraged Washington by releasing cables and war logs relating to the wars in Iraq and Afghanistan in the biggest security breach in US history.

Correa, speaking on Sunday night after declaring victory in the Ecuadoran election, called on “Europe” to settle the fate of the former computer hacker.

“It’s a diplomatic situation for which a solution must be found…as quickly as possible,” Correa said.