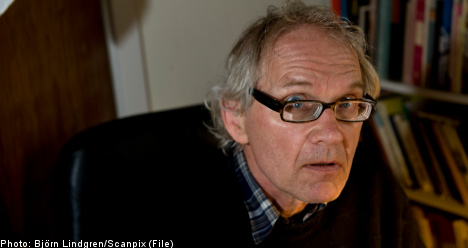 On Monday, religious leaders in Malmö convened an emergency “Conflict Council” (Konfliktråd) to discuss how to tackle the summer exhibition to be put on by Vilks in Sweden’s third largest city.

“They’re going to speak with their members about not taking the bait,” Björn Lagerbäck of the municipal anti-discrimination project Dialogforum told the TT news agency.

“One shouldn’t take in Vilks’s provocation. Let him be alone among his drawings.”

According to Vilks, the goal of the exhibition is to play down criticism of Islam.

The Swedish artist has faced numerous death threats since his drawing of the Muslim prophet with the body of a dog was first published by Swedish regional daily Nerikes Allehanda in 2007. It was published to illustrate an editorial on free speech.

The new paintings of Muhammad would show the prophet – still with a dog’s body – transplanted into famous works by artists including Claude Monet, Peter Paul Rubens, and Anders Zorn.

It also emerged on Monday that Vilks has accepted an invitation to visit the mosque at the Islamic centre in Malmö, offered by the centre head Bejzat Becirov.

“Then he can explain himself without anyone threatening him. Everyone can make mistakes, even me, even Lars, anyone, but it’s never too late to regret it,” Becirov told TV4 news.

The artist took to his blog on Monday night to announce that there would not be any apology.

“But I welcome Becirov’s proposal anyway, and will accept it without a doubt. This can lead to the matter being played down, at least to some extent,” he wrote.

Malmö mayor Ilmar Reepalu slammed the exhibition last week, claiming the show was only being put on for “political ends” and that he hoped “no one will visit the gallery”.

The exhibition is scheduled to open its doors to the public in July.