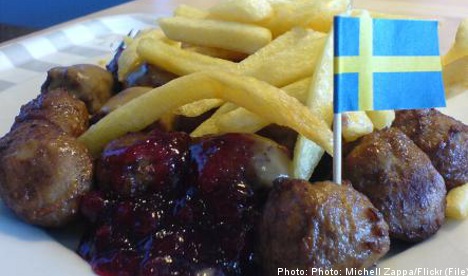 “We learned this morning that tests carried out by Dafgårds showed their meatballs contained horsemeat,” Karin Cerenius, head of inspections in Västra Götaland County with Sweden’s National Food Agency (Livsmedelsverket), told The Local.

The tests were carried out following reports earlier in the week that Czech food inspectors had found traces of horsemeat in Ikea-brand frozen Swedish meatballs.

“These tests confirm the results from tests carried out in the Czech Republic,” said Cerenius.

The new tests carried out in Sweden showed that meatballs from Swedish food producer Gunnar Dafgård AB, the main supplier of meatballs to Ikea stores throughout Europe, contained between 1 and 10 percent horsemeat.

Generally, any finding over one percent indicates that horsemeat was mixed into the ground meat used to produce the meatballs, rather than simply being a case of contamination that took place during production.

The news came as a blow to Dafgård management, which had claimed on Tuesday that previous tests showed their products to be free of horsemeat.

“We’re the victims of a criminal act. We’ve been misled and defrauded.”

Dafgård said the company plans to report the responsible supplier to the police, although it remains unclear from where the horsemeat-tainted meat originated.

He confirmed that Swedish meatballs destined for Ikea store shelves tested positive for horsemeat following the company’s own tests.

The tests were carried out on samples taken from the same batch tested by officials in the Czech Republic, as well as on other batches.

Cerenius said her agency has staff on site at Dafgård’s facilities and that the company would now be required to recall its products because they are inaccurately labeled.

“Then they will have to set about tracing the meat to figure out where it came from,” Cerenius added.

Following reports on Monday of the horsemeat discovery, Ikea halted meatball sales at stores in Sweden and 14 other European countries.

On Tuesday, the Swedish furniture retailer extended the ban to stores 24 countries, including outlets in Hong Kong, Thailand, and the Dominican Republic.

A Lantmännen spokesperson called the recall a “precautionary measure” carried out while the company conducts its own tests.