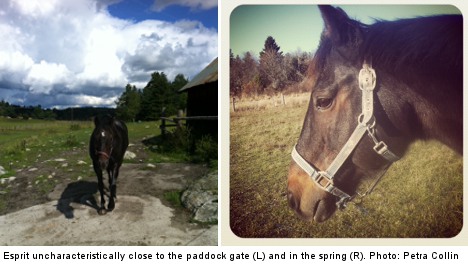 Our dear readers may think we’re horsing about, but with Swedes feeling like they may have backed the wrong nag when it comes to trusting domestic food producers, we wanted to be first past the post with a different breed of equine story.

A profile of Esprit could also once again illustrate why so many find the idea of eating horsemeat so repugnant for sentimental reasons.

Our Swede of the Week spends his days kicking about in the farthest reaches of the large paddock near Vallentuna, just north of Stockholm. When his owners – siblings Cajsa, Petra or Rasmus – go to fetch him, they must slog through high grass in the summers or wade through a sea of mud during Sweden’s long, soggy winters to reach Esprit.

Despite all the recent horsemeat media frenzy, Esprit remains unfazed. He just hangs out. Because he’s kinda lazy. But much loved. And rather handsome, in a powerful, understated Swedish half-breed kind of way.

While Esprit’s chestnut coat is turning grey around the temples, this handsome bachelor is still standing tall. Unfortunately, many of his cousins across Europe, it would seem, haven’t been so lucky.

As inspectors and producers across the continent are chomping at the bit to find out who is behind the food industry Trojan Horse that saw horsemeat slipped into lasagnes and meatballs, Esprit’s two-legged siblings are adamant that they’ll take care of him until his last neigh.

Selling him to a slaughterhouse is out of the question, not only because of their love for Esprit, but also because he was given the anti-inflammatory drug phenylbutazone during an operation ten years ago, thus prohibiting him from being used in any food products.

“Yet frankly, we’d never have him butchered anyway,” says Cajsa, 29.

“We hope he’ll pass away peacefully in the paddock or in his stall. We’ll then have him cremated and take the ashes to be buried on the grounds of our summer house on the Baltic island of Öland.”

Certainly a much more dignified end than being shuttled into a slaughterhouse, turned into a ready meal, only to be recalled off store shelves, and then burned as a biofuel that gives new meaning to the term horsepower.

Esprit’s been with the family since 1997, and his handlers are well acquainted with his ticks and preferences – he hates donkeys, for example, and his sizeist disdain seems to stretch to Shetland ponies, of whom he isn’t particularly fond either.

Among his less attractive qualities? Well, he holds a grudge. Despite a nearby field being evacuated of its donkey pace, Esprit still looks at it with utter scorn and suspicion every time he trots past it.

At times, he can be moody, says Cajsa.

“If you’re good at giving him a proper scratch, he’ll scratch back a bit, but if you stop too soon, well, he’ll sulk.”

Were their lazy but beloved gelding to fall ill, they will have him put down by a veterinarian. Despite their plans for ensuring Esprit has a proper send off into that great pasture in the sky, his family members remain puzzled by all the horsemeat hysteria.

“I think this horsemeat lasagne story is a bit silly, if you eat a cow why not a horse?” says Cajsa, hinting that overly frugal consumers only have themselves to blame.

“People need to stop price-hunting. Pay a bit more to make sure the animal had a good life, sure it’s more expensive but you don’t have to eat meat every day.”

Cajsa does admit, however, that she herself wouldn’t actively go seek out horsemeat to eat. And turning Esprit into meatballs is a non-starter, even if taking care of him can be tough going for his hardworking siblings.

They did discuss selling him several years ago, as Cajsa went off to study abroad and little brother Rasmus did military service. But the idea ended up as an also ran.