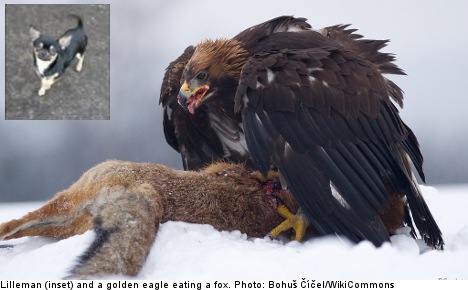 Karolina Widing, a 38-year-old from Hjortkvarn, near Örebro, was shocked when her pet chihuahua Lilleman (‘Little Man’) went missing in mid-January.

“After I let the dogs out one afternoon, he never game back. I searched until midnight – I was horrified,” she told The Local.

Even stranger, neighbouring hunters couldn’t find any tracks from the 2-year-old dog in the snow.

Widing reported the missing pooch to the police, and left her back door open throughout the night in case Lilleman would return.

By morning, Widing resumed the search.

It didn’t take long, however, before she was stopped dead in her tracks upon discovering a pool of blood by a wall of the house.

“It looked as if someone had shot him,” she explained.

“But there were no prints. It couldn’t have been a fox that took him, or anything similar, there was just a pool of blood and then nothing.”

Widing talked to more neighbours, and one of them explained that he had seen an eagle flying off with a black object in its claws at the exact time the dogs had been let out.

The neighbour had thought it was a rabbit.

“In some senses, I’m relieved to know what happened to him,” Widing said.

“I was so worried that he would have frozen to death. He only weighed three kilogrammes.”

Widing concluded that the eagle must have indeed taken Lilleman, which explains why there were no tracks from the pool of blood.

She believes the eagle probably didn’t get a clean grab of the dog, as Lilleman was near a wall, with the blood a result of a probable fight between the winged predator and the sorely outmatched canine.

While devastated at the death of Lilleman, whom she only owned for a month, Widing nevertheless welcomed a decision by the Örebro County Administrative Board (Länsstyrelsen) to award her with 16,000 kronor ($2,490) as compensation for her pet’s premature death.

Since the golden eagle that took Lilleman has protected status in Sweden, Widing was eligible for the sum under the same statues that allow farmers to receive compensation when livestock is killed or harmed by wild animals such as bear, wolf, lynx and wolverines.

Widing plans to use the money to build a safety area for her other pets, and has used the experience to warn others.

“Don’t be naive, don’t let your dogs out without a leash if you live anywhere near an open area with these eagles,” she told The Local.

“The eagles can be very hungry.”

The Golden Eagle is one of the more well-known birds of prey in northern Europe, and has strong enough talons to grab animals as large as foxes. Their wingspan can measure as long as 230 centimetres.