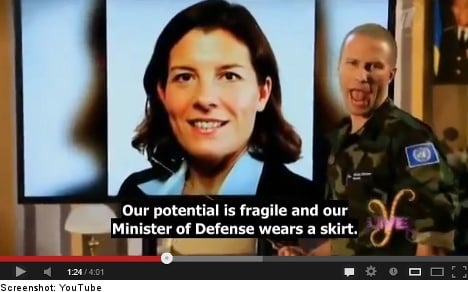 Sweden, he claimed, could only defend itself for one week if it came under attack.

The controversial admission of Sweden’s dwindling military capacity has been seized upon by Russian national television in a sketch on the satirical programme Yesterday Live.

Featuring the melody of Abba’s hit song Mamma Mia, the parody shows a man who appears to be masquerading as Göranson as he makes an impassioned plea about the imminent threat from the east.

“Mamma Mia! They will tear us apart! 7-3! Just like in hockey last year,” he sings, referring to Russia’s drubbing of Sweden at the 2012 World Championships.

The clip, a version of which has been published on YouTube with English subtitles, features a rollicking chorus at first sung by a group of fawning female journalists and later by a set of male dancer/soldiers dressed in tight yellow shorts and blue sleeveless shirts.

The video’s faux-commander at first suggests that Sweden’s only hope of surviving a Russian invasion is to join Nato.

He then makes sexist claims about the qualifications of Karin Enström, Sweden’s minister of defence.

“Our potential is fragile and our Minister of Defence wears a skirt,” he sings.

But by the end of the video, which also includes references to Ikea, Saab, and duty free alcohol purchases, the satirical Swedish commander has changed his tune about Sweden’s suitability for Nato.

“If the Russians are strong…we should ask them to protect us from Nato,” he suggests.

Despite being ridiculed in the sketch, Engström took it all in stride.

“Freedom of speech is a good thing, especially in Russia,” she told the Aftonbladet newspaper.