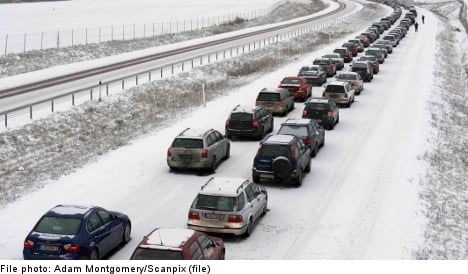 The popular winter sport destinations in Jämtland and Härjedalen are expected to be hit with the full force of the storm which carries a class 2 warning (of three in an ascending scale) from the Swedish weather agency SMHI.

Winds are expected to top 25 metres/second in some local areas together with heavy snowfalls as the wintry weather returns to end a mild spell.

Some 15-30 centimetres of snow are expected in areas around the resorts of Storlien and Åre and police have issued warnings against driving and skiing.

The worst of the weather is expected to push in from the west during the afternoon and persist during the evening.

Sunday is forecast to be significantly calmer with sunshine expected for the annual Vasaloppet cross-country ski race in Mora in Dalarna.

Several other areas of northern Sweden have been issued with a class one warning by SMHI including coastal areas of Västerbotten and inland Västernorrland.

The Swedish Transport Administration (Trafikverket) has also issued a warning against taking to the roads and has updated information on its website to assist drivers.