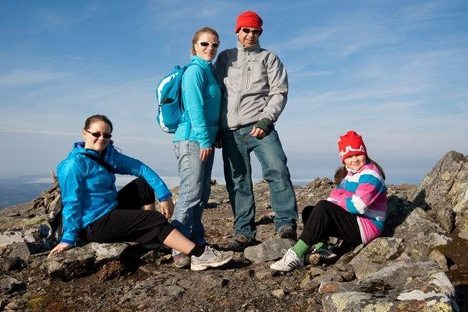 Such was the case for the Duckworth family before arriving in Stockholm in 2010.

Parents Joannah and Jason and daughters Halle and Nayeli – then 11 and 9 – took the opportunity to temporary relocate to the Swedish capital from North Carolina,

thanks to Jason’s job.

“Finding a school was one of the most important factors,” Joannah says. “We didn’t want the girls moving to a brand new country and having the added worry of feeling like the new kids at the school before fitting in,” she ads.

With information provided by a relocation company, the Duckworth’s visited a number of different schools during a pre-visit in what was to be their new home.

They decided on Stockholm International School, an independent primary through to secondary school, founded in 1951. Around 500 students represent 54 nationalities and the 74 teachers come from 17 countries.

“We didn’t speak Swedish and neither did the girls,” Joannah adds. “So was important for us that they had an education that was still in English but they also had the chance to learn Swedish. “

SIS provides much more than just highly accredited education. The special nature of the many transient families whose children attend the school means the staff is experts in dealing with comings and goings, as well as catering to the global melting pot of cultures in the classroom.

“It’s just a very unique but fantastic arrangement in the way they deal with it. Some of the kids will only be there for two or three year and they ensure all cultures are represented in the school so that everyone feels at home.”

The entry process ensures children’s academic levels are matched through tests, correspondence with former schools and the use of international curriculums. Both inside and outside of the classroom, the school has a community feel.

Once engaged with the SIS, the doors open up to the whole family. Having put her career in logistics on hold, being part of the active Parent-Teacher Association became a lifeline for Joannah when starting up in Sweden.

Joannah now chairs the PTA and, along with several events throughout the academic year, there are a range of different clubs – from horse riding to arts and crafts and photography – for parents to join while their children are at school.

“For me personally that was a huge thing when we first moved here,” she says. “I always worked full-time in the States so when we moved to Sweden I didn’t know anyone and didn’t have anything to do. It was fantastic to be able to meet families from all over the world in this way.”

Meanwhile, her daughters have a much bigger view of the world these days, something that cannot be taught from any textbook.

“Through SIS, they have been immersed both in the Swedish culture but and an international culture that has taught them to be more open-minded, more tolerant and much more aware of people from all different walks of life and areas of the world.”

This year the process starts again when the Duckworth’s return to the US in the summer. They will definitely miss the friends that they have made en route.

“Choosing a school will be a top priority again,” says Joannah. “Finding another international school is not a necessity for us but because of the great experience we have had in Stockholm, we wouldn’t rule it out.”