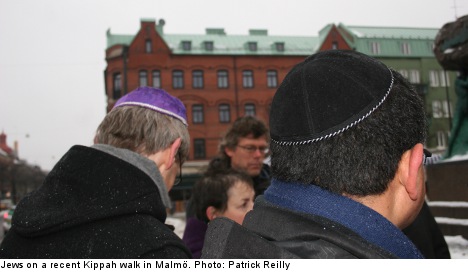 Video cameras and a heavy combination locked door greet visitors as they approach Malmö’s Jewish community centre. Once inside, appointments are made with a secretary who sits behind thick glass.

Security has been stepped up in the building, which is located in central Malmö, following an explosion last September that led to arrests and was classified as a hate crime by local police.

The attack was just the one in a long line of anti-Semitic incidents which have become increasingly common in Sweden’s third largest city. Even the city’s long-sitting mayor Ilmar Reepalu, who recently announced plans to step down, has been dogged by accusations of being anti-Semitic

But Malmö’s small Jewish population is fighting back. Amidst the shattered glass and reports of persecution the incidents are being used as a catalyst for change involving not only local Jews but also the wider populace.

“There is a kind of revival of the Jewish community here considering the number of us that are in Malmö,” local Jewish resident Jehoshua Kaufman tells The Local.

Malmö’s Jewish community centre has about 600 members, while there are an estimated 2,500 Jews among Skåne County’s total population of 1.25 million residents.

Kaufman started organizing regular kippah walks in Malmö back in December 2011 as a reaction to persistent anti-Semitism.

“Wearing a kippah is not just a protest against anti-Semitism but also a revival of the Jewish self-confidence,” he explains.

“Now people describe themselves in newspapers as Jewish and are active in the community. They are more conscious of their identity. It is not as bad as it could be.”

A recent kippah walk in Malmö prompts a healthy turnout of people from all across the city. Many are motivated to show their support for local Jews following media reports of persecution and intimidation.

“I’m not Jewish but I’m a Christian and a teacher of history and we all know what happened in the past,” says retired school teacher Britt-Marie Aspenlind.

“Jews have contributed greatly to Malmö but they haven’t been given enough support by politicians who aren’t taking the anti-Semitism problem seriously enough.”

Also along on the walk is Katarina Egfors, a Vicar in the Church of Sweden.

“It’s very important for all of us to come together and show solidarity with the Jewish community in Malmö. We are all entitled to have our beliefs respected,” she says.

Mayor Ilmar Reepalu attended one of the first kippah walks last year in an attempt to heal relations with local Jews. The 69-year old has incurred the wrath of community members and indeed Jews worldwide for his outspoken remarks about Israel.

Last year, he was also forced to backtrack after suggesting in an interview that “Sweden Democrats have infiltrated the Jewish community in order to push their hate of Muslims”.

The mayor of two decades is set to step down on July 1st and local Rabbi Shneur Kesselman says he won’t miss him.

Kesselman has been on the receiving end of his fair share of anti-Semitic abuse since moving to Malmö from his native United States in 2004.

Last year, he discovered someone had carved the word “Palestina” into his car, but he nevertheless remains committed to dressing in traditional Jewish attire.

“Many Jewish people living in Malmö have lost their sense of security because of his (Reepalu’s) comments. I truly hope that whoever takes his place is more responsible,” Kesselman tells The Local

Statistics released earlier this year by the Swedish Crime Prevention Council (Brottsförebyggande rådet, Brå) revealed that of the 44 anti-Semitic hate crimes reported in Malmö in 2010 and 2011 not a single one made it to a prosecutor.

And for the total of 480 hate crimes reported in Malmö during the same period, there were zero convictions.

Another American transplant, Shmuel Goldberg, has been living in Malmö for less than a year and like Kesselman isn’t prepared to hide his beliefs.

“I wear a kippah all the time and I get harassed quite often. I grew up wearing a kippah so it isn’t a big deal for me so I wear it, enjoy it, and just have to put up with it,” he tells The Local

“I don’t speak Swedish so well yet so I can’t tell what people are saying, but I do get shouted at often from car windows.

“Any hate crime is a crime regardless of who it is perpetrated against. In the United States if a hate crime is committed the police go after it but in Sweden that doesn’t appear to be the case.”

While the unsavoury incidents have prompted some Jews to leave Malmö in recent years, the remaining members of the community believe there is more to the story than just the negative headlines.

“We are a diminishing community partly because of people dying. People also leave because their friends have left, often for Stockholm, where they can find work,” Frederik Sieradski, a spokesman for the Malmö Jewish community, explains.

Kaufman adds that the Malmö Jewish community isn’t as large or as active as the one in the Swedish capital.

“In Malmö there are only a few things happening a month apart from religious services while in Stockholm there are two things every day,” he explains.

“To live a full Jewish life which is intellectual and cultural it’s important to be connected to other Jews.”

Malmö has a Jewish daycare centre but attempts to set up an elementary school never materialized. Young Jews, who are active in church activities, are thin on the ground but that’s not to suggest they have disappeared entirely.

Eli Kaufman, 25, recalls being teased when he was younger for being “the only Jew in the classroom” but has never experienced hostile anti-Semitism where he has grown up in Malmö.

Still, it’s hard to find other local Jews in their mid-20s in Malmö.

“I don’t have many Jewish friends my own age,” he says.

“I’m involved in the egalitarian community which is separate from the Orthodox one, and within that we have a very good spirit.”

For the Jews that choose to remain in Malmö, there have been attempts made to build bridges with the city’s large Muslim population. While Israel and its policies remain a hot topic of debate, both communities seem to have at least found some common ground.

Sieradski has met privately with a local imam who said afterward that “we should dance with the Jews in the streets”.

“I was quite blunt with him,” Sieradski says of his meeting with the imam.

“I said that if you don’t want to support Israel then hug us and make us feel welcome in Malmö. What is happening now is that many kids are becoming Zionists and see Israel as they only place where they can be.

“If you really want to achieve what you want then don’t hate us. Hatred just makes us stronger and more tied together. He agreed with me as many Muslim leaders see the problems too.”

The efforts on the part of Malmö’s Jewish leaders appear to be bearing fruit with a young Malmö Muslim, Siavosh Derakhti, who was given an award last autumn by the Swedish Committee Against Anti-Semitism.

Derakhti, a 21-year-old son of Iranian immigrants who has lived in Malmö his entire life, was recognized for setting up the organization Young Muslims Against Anti-Semitism to educate students about the Holocaust.

“Jews in Malmö are subjected to everything from threats to harassment and it’s our duty as Swedish citizens and residents of Malmö to react and stand up for human rights,” Derakhti wrote in a recent opinion article in the local Sydsvenskan newspaper.

Kippah walks through central Malmö are now a regular occurrence and local Jews appear to be more willing to show their beliefs than before the wave of anti-Semitic incidents.

“I’ve seen friends join us on the kippah walks [to show their support] and they haven’t been close to a synagogue for 40 years. Otherwise they would never come but it’s a starting point,” says Jehoshua Kaufman.

Shmuel Goldberg is even more defiant: “We need more Jews walking around wearing their kippah which is a wonderful thing. It’s nothing to be ashamed of.”

“In Israel, Malmö is a household name but not in positive terms,” adds Sieradski.

Events such as the kippah walks and greater harmony with the Muslim population show that Malmö’s Jews are at least attempting to provide an alternative to that image.