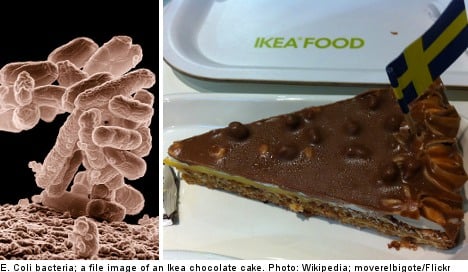 According to the Shanghai Daily, high levels of coliform bacteria were found in a shipment of Ikea’s almond chocolate cakes, prompting authorities to seize and destroy 1.87 tonnes of the dessert.

The shipment arrived in Shanghai from Sweden in January.

Coliform bacteria are universally present in large numbers in the faeces of warm-blooded animals and are commonly used bacterial indicator for testing the sanitary quality of foods and water.

Ikea officials have since pointed that the bacteria was not healthy

“We now know that it’s a coliform bacteria that’s not dangerous to people’s health, not as with E. Coli or anything similar,” Sara Paulsson of Ikea told the TT news agency.

“But we’ll never know exactly which bacteria it is because the cakes have been destroyed.”

The cakes have not been sold in Sweden.

The Local, now in Spain at www.thelocal.es

The Ikea chocolate cakes were one of 247 different products from a range of suppliers that failed Chinese sanitation inspections, the Shanghai Daily reported.

“We buy chocolate from one supplier. That it’s of high quality, that checks are carried out in all warehouses, and that rules are followed are obviously all important questions,” Ikea spokeswoman Ylva Magnusson told TT.

The revelations that faecal bacteria were found in Ikea’s chocolate cakes comes just a week after horsemeat was found in the company’s Swedish meatballs, prompting a massive recall.

On Monday, the Sweden-based meatball supplier to Ikea stores in Europe said it had traced the horsemeat to a Swedish supplier with ties to slaughterhouses in Poland.

“It’s important that products that might contain bacteria don’t make it to customers,” she said.

“The safety of our products is our highest priority.”

Ikea has since been in contact with manufacturer Almondy to determine exactly where in the chain things turned sour.