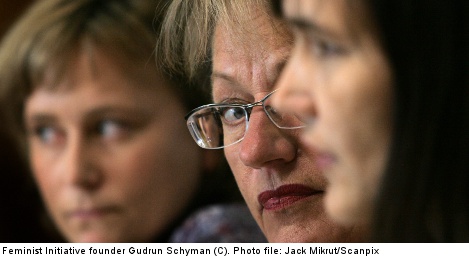 Swede of the Week

Schyman, the former leader of the Left Party, was among the people who in 2005 started the Swedish feminist political party Feminist Initiative (Feministiskt initiativ), known by its initials Fi (pronounced 'Fee').

The party has never come close to garnering enough votes to gain representation in the Riksdag (in 2010, 0.4 percent of Swedish voters marked Fi on their ballot paper).

However, Schyman and the party she established are a feminist force to be reckoned with in Swedish politics, prodding other parties for a perceived lack of progress promoting women's issues.

In 2011. Schyman gave up her role as spokeswoman to let other talent emerge, before going into local politics at home in Simrishamn, southern Sweden.

But on Thursday, the outspoken politician, who often sports a dash of red lipstick, told Sveriges Television (SVT) that she could no longer stay away from national politics.

"We have growing sexism in our society, the hatred of women is booming on the internet, and we can see how the labour market has completely ground to a halt," she said on the morning talk show Gomorron Sverige ('Good Morning Sweden').

The 64-year-old Schyman, who grew up in the north Stockholm suburb of Täby, worked as a social worker in the 1970s, getting involved in politics by joining a Marxist-Leninist faction within the Swedish Communist movement.

In the 1980s, she joined the Left Party, then known as the Left Party of Communists (Vänsterpartiet Kommunisterna – VPK), holding a number of leadership posts before being elected to the Riksdag in 1988.

In 1993, she was elected party leader. She left the post in 2003 amid a scandal stemming from revelations that she had claimed tax deductions to which she wasn't entitled, an offence for which she was fined after admitting her guilt.

Schyman has generated headlines over the years for controversial proposals such as a "man tax" and publicity stunts like storming the annual meeting of Investor in a campaign to raise awareness of the lack of women on corporate boards.

The stunt, devised by controversial publicists Studio Total who later made an international name for themselves with the pro-democracy teddy bear drop over Belarus, was intended to highlight wage discrepancies between men and women.

Video of Schyman burning cash in 2010

Her name has also made it into the headlines for personal reasons – she has been treated for alcoholism – as well as for punchy statements easily translated into polemic one-liners.

In 2002, Schyman said Sweden had the same societal structures as Taliban Afghanistan, which was widely interpreted as "Swedish men are like the Taliban".

The controversial statement was, however, backed up then Equality Ombudsman Claes Borgström, who expanded it to say Swedish women were as guilty as men in their acceptance of inequality.

Schyman has also been a contender on hit television show Let's Dance. She made it about halfway in the competition, before being voted off by the audience for her footwork to Don't Cry For Me Argentina.

Schyman moves her feet on Let's Dance in 2010

One of her most vocal supporters is Abba frontman Benny Andersson, who gave her fledgling party 1 million kronor to help its campaign in the European parliamentary elections in 2009.

At the time, Andersson said that he not only supported Schyman's fight for equality, but that she was also "a principled politician with a backbone".

In later years, since her retirement from Fi, Schyman has worked at the municipal level in Simrishamn, southern Sweden.

Her disgruntlement at Swedish politics was however not hidden at an open seminar in Stockholm last year.

At the session, Schyman told Mona Sahlin, the former leader of the Social Democrats who failed to bring the traditional powerhouse political party back to power in 2010, that election debates had been "so incredibly dull".

"Can't we just have some fun, why does it always have to be so serious!" she exclaimed.

RELATED: A list of The Local's past Swedes of the Week

Schyman is one of four candidates nominated to act as the official Fi spokesperson, according to a list published on the party's website on Thursday.

Today, Fi is currently headed by two women and one man, as the party's founding principles allow for several spokespersons.

The arrangement is unusual in Swedish politics.

The Green Party, however, also has two spokespersons – one woman and one man – while the remaining parliamentary parties all have one leader, but many by tradition have a women's association as part of their political organization.

While Schyman's potential comeback to national politics isn't yet assured, Thursday's announcement won't likely be the last time her name bubbles up in the national press as Sweden heads toward the 2014 elections.

After all, it's hard to resist writing about a political veteran with a knack of headturning quotes, like the quote she gave in an interview with SVT last year about gender roles.

"The man is considered human, the woman is just a complementary being."

Editor's Note:The Local's Swede of the week is someone in the news who – for good or ill – has revealed something interesting about the country. Being selected as Swede of the Week is not necessarily an endorsement.