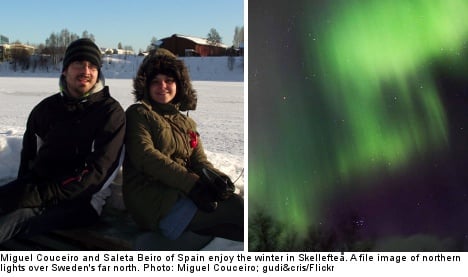 For anyone who finds themselves tromping around the quiet streets of Skellefteå, finding Miguel Couceiro, 29, and Saleta Beiro, his 30-year-old girlfriend of more than six years, probably won't be too hard.

“Swedish people all dress in black,” explains Couceiro, who first landed in this northern Sweden back in 2009 to pursue a masters in wood technology.

“But we try to be much more colourful. You can spot as from far away. It's also easy to find a lot of colourful stuff on sale because no one else wants to buy it.”

The couple's taste for eye-catching clothing isn't the only thing that makes them unique among Skellefteå's roughly 30,000 residents.

Together, the couple makes up nearly half of the city's Spanish population – at least according to their own calculations.

“Since we moved here, three more people from Spain have moved here. But we actually met them all in Spain. They read our blog and after hearing from us about life here, they decided to move here too,” Beiro explains.

The blog, Å: Blog de Suecia, www.blogdesuecia.es, began early in the couple's stay in Skellefteå as a way to give friends and family back in Spain a window into their “exotic” life in northern Sweden.

Beiro, who showed up in the dead of winter six months after Couceiro had arrived to start his degree, still remembers the shock of stepping off the plane.

“It was -27C the first day I was here. That was a BIG change from Spain,” she recalls.

“Everything was completely white. It was crazy. Everything looked the same and I didn't dare move around the city at all.”

While her boyfriend pursued his studies, Beiro took classes to improve her English before later enrolling in Swedish for immigrant (SFI) language classes.

Eventually, local tourism officials learned to their surprise that some wayward Spaniards were blogging in Spanish about life in Skellefteå.

The discovery dovetailed nicely with the launching in 2011 of a direct Ryanair flight from Skellefteå to Barcelona's Girona airport.

Suddenly, Beiro found herself working for Destination Skellefteå, helping them manage their social media efforts as well as serving as a one-person welcoming committee for the increasing numbers of Spanish tourists arriving via Ryanair and, in some cases, after reading about the area on the couple's blog.

As Couceiro continues to hunt for permanent employment after finishing his degree, the couple explains that they've really fallen in love with life in Skellefteå, not to mention the cheap housing.

“Houses are really cheap in Skellefteå. Much cheaper than in Spain, no matter if you are buying or renting,” Couceiro explains.

“But most of all we love that it's like living in two different cities. In the summer it's full of flowers and green and gorgeous. And in the winter, it's completely different – white and bright, and beautiful.”

Bright? Indeed, while Skellefteå's proximity to the Arctic Circle makes sunlight scarce in the winter, the lack of natural light doesn't leave the town drenched in darkness, according to Couceiro.

“It's actually much darker in Stockholm in the winter. Here, there is snow everywhere, so what little light there is gets reflected. It's actually a lot brighter here than people think.”

While some of the stereotypes they had about Swedes before they arrived turned out to be true (“lots of blonde girls, cool guys, and totally into fashion”), others have been proven false.

“The Swedes aren't quite as closed and reserved as many people in southern Europe think,” says Couceiro.

“The people here in Skellefteå are really nice. We really feel like we're a part of the community.”

Of course, there were some adjustments.

“We are more used to touching each other and giving big, warm greetings in Spain. Here it just takes a bit more time. But people are really nice and we do feel like we're a part of the community,” he continues.

“There's also no place to get good tapas here. If we want them, we just make them at home.”

Skellefteå's dearth of authentic Spanish cuisine is more than made up for by other things the town has to offer.

“There is a beautiful old wooden church village of Bonnstan,” he says, referring to a collection of more than 100 wooded buildings dating from the 1700s.

A nearby wooden bridge, Lejonströmsbron, was the scene of the last military battle fought on Swedish soil in 1809 when Swedish troops fought in vain against the 6,000-strong Russian army.

But the real attractions are to be found in nature.

“There are Sami reindeer herders quite close by. I had a Spanish tourist ask me if he could see any, and I told him he could see thousands,” says Beiro.

Then there are those other four-legged beasts.

“The moose! They are such strange animals. Such skinny legs and huge heads,” Beiro recalls from her experience on an elk safari.

“They are like a cross between a cow and a horse, but drawn by a child.”

But the biggest treat of all about living in Skellefteå?

“Just the other day I was brushing my teeth and looked out the window and there was this huge northern lights display.”

Beiro agrees, explaining that none of the pictures or videos she'd seen could prepare her for the aurora borealis she's seen in her adopted home in northern Sweden.

“There is so much movement. It's like the lights are dancing across the sky,” she says. 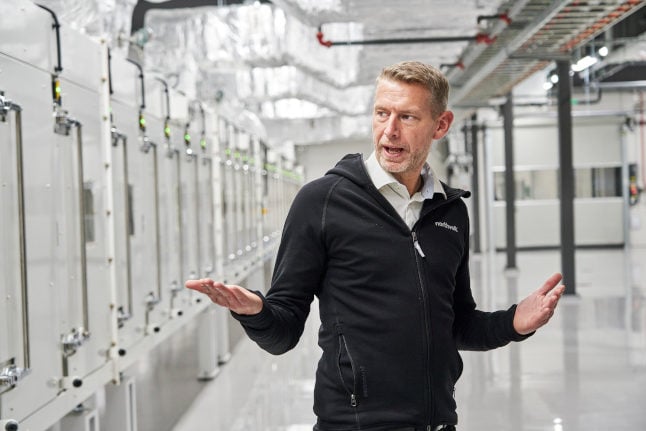