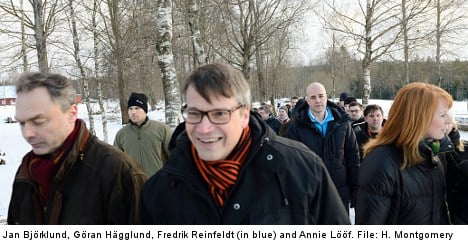 Less than two weeks after a four-party powwow at Centre Party leader Annie Lööf’s childhood home in Maramö to start planning for the 2014 elections, opinion polls show support for the coalition has dropped below 40 percent.

After deliberations in the white villa, the four party leaders came out to grill sausages in front of the awaiting press corps.

It is the first time since 2008 that the centre-right coalition, led by the powerful Moderate Party, has had the confidence of fewer than two in five Swedes.

The poll by Demoskop showed that both Lööf’s party and her coalition colleagues in the Christian Democrats are below the four-percent threshold needed to enter parliament.

The opposition Social Democrat, Green and Left parties, which in 2010 formed a “red-green bloc” in an unsuccessful bid to dethrone the government, together have 48.1 percent of the voters’ support according to the poll, which was published in the Expressen newspaper.