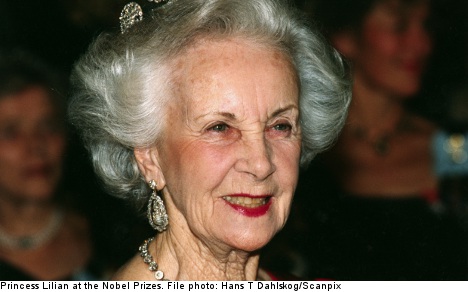 The news was confirmed in a statement published on Sunday on the Royal Court’s website.

“Princess Lilian died peacefully during the afternoon in her home on Djurgården in Stockholm,” the statement read.

“She was the grandmother the royal children never had, that’s what Lilian was. All of them just adored her,” he told the TT news agency.

Princess Lilian was born on August 30th, 1915 in Swansea, South Wales. She had a first marriage to actor Ivan Craig which ended in divorce in 1945.

She worked as a fashion model before taking a job in a factory during in the early years of World War II.

In 1943, she met Sweden’s Prince Bertil, son of then King Gustaf VI Adolf, at a party at the Les Ambassadeurs gambling club in London.

The couple moved back to Sweden after the war, living in Villa Solbacken on Djurgården in Stockholm.

Finally, in 1976, three decades after meeting, they were granted permission to marry by King Carl XVI Gustaf, wedding on December 7th, 1976.

Princess Lilian has been a widow since Prince Bertil died in January 1997.

In 2010, the Royal Court announced she was suffering from Alzheimer’s and thus couldn’t participate in Crown Princess Victoria’s wedding in June that year.

“It’s incredibly sad. She was the last of her generation. Now we’re starting a new phase for the royal family in which the king and his siblings are the oldest,” Elisabeth Tarras-Wahlberg, a former Marshall of the Realm and long-time aid to the royal family, told the TT news agency.