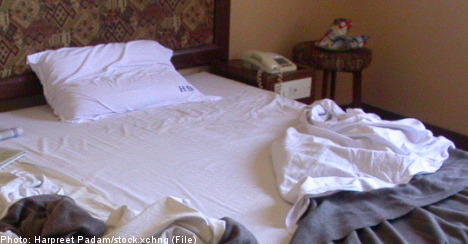 The man woke up in his home in Gnarp, eastern Sweden, at around 3.30 on Sunday morning to find that someone was moving around beside him in his bed.

However, the 70-year-old hadn’t noticed anyone coming into the house or the room during the night, and promptly got out of bed and called the police.

“He got a bit of a shock. He’d been sleeping with earplugs as it was quite noisy in the area,” Max Forsström of the Gävleborg police told the Aftonbladet newspaper.

The officers arrived to find the young man fast asleep.

When the police and the 70-year-old finally managed to wake the bed intruder, he was extremely apologetic, according to the paper. He explained that he lived less than two kilometres away and must have simply entered the wrong house.

“We let him walk home and sober up in the fresh morning air. He definitely needed the walk. I’m guessing that he found his way home,” the officer added.

The 20-year-old is not suspected of any crimes and officers did not press charges.

“The young man had no bad intentions, there was no malice involved,” Forsström said.