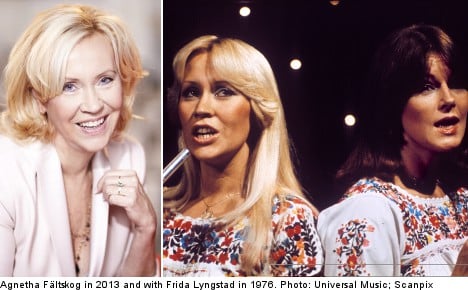 “I never thought I’d sing again, but when I heard the first three songs, I couldn’t say no,” the 62-year-old Fältskog said in a statement.

“I haven’t written music for a long time, but when I sat down at the piano, it came naturally.”

Fältskog’s new single, When You Really Loved Someone, was released on Monday on Spotify and iTunes and is one of the songs on the forthcoming album entitled A, scheduled to be released on May 13th, shortly after the opening of the new Abba museum in Stockholm.

The album is a product of collaboration with Grammy-nominated Swedish songwriter and producer Jörgen Elofsson, who has worked with popular female artists such as Kelly Clarkson and Britney Spears.

“Agnetha was ready to make music again. We felt it,” Elofsson said in a statement.

Video of Agnetha Fältskog’s When You Really Loved Someone

The famously reclusive Fältskog’s last studio album, My Colouring Book, was released in 2004 and consisted of covers of her favourite songs from the 1960s.

In 2010, she sparked excitement among Abba fans around the world when she hinted that she would be open to a reunion of the wildly-successful Swedish pop band.

“A reunion, an occasional opportunity, maybe in connection with a charity event, I believe we could consider it,” she told M Magazine at the time.

“We wouldn’t reunite for a tour like the Rolling Stones and other old bands do now. However, I could see us doing something together in the future. It is just a feeling I have that it would be fun to get together, talk a bit about the past and maybe perform together.”

Abba, one of the most popular and enduring bands of all time, formed in 1970 and shot to fame after winning the Eurovision contest in 1974.

The band, which has sold more than 378 million records to date, split up in 1982 and has never reunited.

A museum dedicated to the group will open in Stockholm this spring.

Since the group disbanded more than 30 years ago, fans have never ceased speculating over an Abba reunion. But in the wake of the success of “Mamma Mia!” — the musical and film based on their hits — Ulvaeus vowed the group would never perform together again.

“We will never appear on stage again,” he told Britain’s Daily Telegraph in 2009, adding that he wanted fans to remember the band as “young, exuberant, full of energy and ambition”.