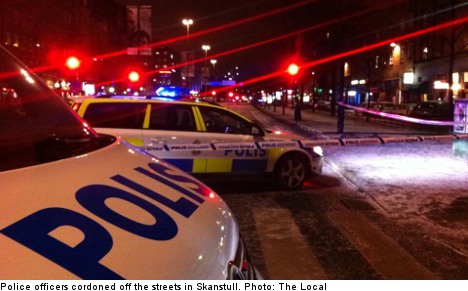 “There has been a bomb threat and we have had to ask people living in the nearby apartments to leave their houses,” a policeman on the scene near the Skanstull metro stop on the island of Södermalm told The Local.

Guests and staff members of the nearby Clarion hotel were also asked to leave.

At 11.15pm, after a bomb squad with a robot entered the building, a loud noise was reported by witnesses nearby.

The squad had performed a controlled detonation of the suspicious object, according to the Aftonbladet newspaper. Soon after, traffic in the area returned to normal.

The object was found by staff members of the Forex offices on Ringgatan shortly after 6.30pm. Workers alerted security guards, who in turn contacted police.

Residents gathered around the cordoned-off streets to watch as a bomb squad entered the building.

“They told us there was a bomb and asked us to leave. It was a shock, it was a bit scary to be honest,” one Skanstull resident told The Local.

“I’ve been out here since seven,” another said.

“My apartment block wasn’t evacuated, but I live around the corner, and have been waiting to see if anything is going to happen. It’s kind of exciting, things are always happening in this part of town.”

Police have not identified any suspects as yet, according to the TT news agency.

Skanstull, on the island of Södermalm, was mostly silent throughout the night, with large sections of Götgatan and even the Skanstullsbron bridge closed off to the public.

Buses in the area were cancelled, and the underground trains skipped the Skanstull station throughout the evening.

However, traffic and public transport was back up and running by 11.30pm.