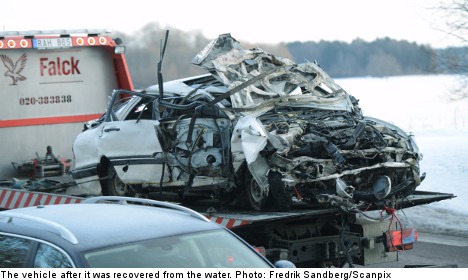 The incident took place on Monday night as police were chasing the suspected thieves, who had been reported for driving off from a petrol station near Uppsala in eastern Sweden without paying.

In an effort to stop the suspects’ escape, police called ahead to operators of Hjulstabron, a drawbridge near Enköping that was open at the time for passing boats, and demanded that they close the entrance.

But the thieves either didn’t slow down or decided to crash through the barricades and then drove off the open bridge and into the icy waters below.

Divers recovered the bodies of the two suspects, a 20-year-old father and his 21-year-old friend, early Tuesday morning.

“They clearly tried to use the bridge as a fixed barricade. There are guidelines for how police should act in such situations. Whomever they are following should be warned and signaled properly. As far as I can tell, that wasn’t done,” prosecutor Håkan Roswall told the TT news agency.

According to police guidelines, a vehicle being pursued should be warned at least 250 metres ahead of a fixed barricade. In addition, a police car should be parked near the barricade with blue lights flashing.

“Having a boom with a red light isn’t enough,” said Roswall, referring to the barrier that normally warns vehicles not to cross the bridge when it is open for boat traffic.

The prosecutor also expressed his scepticism about the officers’ methods.

“These people were suspected of stealing petrol. To engage in a pursuit that ends like this makes one wonder if the officers exercised good judgment,” said Roswall.

Criminal justice expert and criminology professor Jerzy Sarnecki was also critical of how the police conducted their pursuit.

“It’s a horrible tragedy. Police are supposed to catch criminals, but they should never put someone’s life at risk,” he told TT.

He admitted, however, it’s hard to be certain about whether the officers made the right choices.

“If police had a decent chance of knowing what might happen, then they have committed professional misconduct,” said Sarnecki.