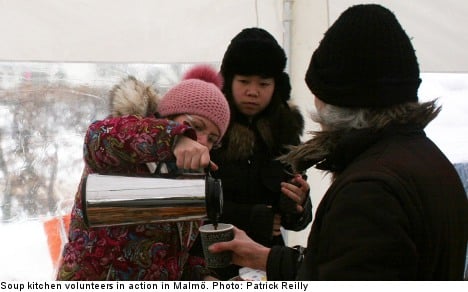 Malmö’s Folkets Park is best known for its funfair and live music in the summer. On a recent snowy winter morning the park is busy once again but for an altogether different reason – to host a soup kitchen for the city’s growing number of homeless.

Soppkök Malmö (‘Soup Kitchen Malmö’) has been dishing out warm meals since last April and similar operations are underway in Stockholm and Gothenburg. Organizers Janni Bjödstrup and Douha Mohammed Ali felt compelled to do something after noticing how widespread the issue had become.

“We want to highlight the problem of increasing homelessness in our so-called welfare state for the general public, as the situation has changed a lot in recent years,” Janni Bjödstrup tells The Local as she sets up an awning for the temporary kitchen.

“Nowadays it isn’t just those with addictions who end up on the streets. There are a lot of homeless people who have lost their home as their business collapsed during the economic crisis.”

The challenges of securing a flat also contribute to the problem, according to Bjödstrup.

“Getting an apartment is difficult anyway and with debts you can’t get a reference and end up with nowhere to go,” she says.

Estimates put the number of homeless people in Malmö at approximately 1,000, according to a recent survey carried out by the city council. Nationally the figure is estimated to be around 34,000.

However, both figures likely underestimate the true scope of Sweden’s homeless population, due to the large numbers of undocumented people who end up in the country.

Flyers printed Greek, Polish, Hungarian and over a dozen other languages promoting the latest soup kitchen are a testament to the fact that homelessness is a problem for people with a wide range of backgrounds.

Joint organizer Douha Mohammed Ali grew up in Malmö and tells The Local that she always sees new faces at every soup kitchen.

“I always wondered how people end up homeless as we have social security measures in Sweden that are supposed to prevent it. Every person has a different reason why they are on the street,” he explains.

“Often it can be somebody losing a family member and struggling to cope afterwards. It’s not just a case of drink and drug addictions as that is the last thing that happens when people don’t get the help they need in the first place.”

Judging by the cosmopolitan mixture of people at the soup kitchen, the homeless problem in Malmö appears to transcend the traditional stereotypes of addiction. Many came to get some blankets to stave off the cold when they sleep under one of the city’s many bridges.

Michel Perrin, a well-spoken French engineer, came to Sweden 15 years ago for work but after losing his job and his home he has been forced to live on the streets for the past two years.

“During winter the trick is to take a walk at high pace to keep you warm at night,” Perrin says whilst sipping a cup of coffee.

Many of the homeless people who gathered under the awning said they would walk all night and then go to the library or a church when they opened in the morning and take a nap.

During a particularly cold spell in Malmö January, the Immanuelskyrkan church opened its doors for a couple of nights to accommodate nine homeless people. Such gestures are rare but nevertheless draw attention to the matter.

While cold winters in Skåne are a natural threat to survival for the homeless, they also often much face the prospect of violence. Last November, 53-year old Asim Berciragic, who was a well known beggar in the city, was savagely beaten to death on the steps of a local school.

Berciragic’s murder prompted outrage and there was a candle-lit vigil outside a local supermarket where he often slept. Police have since arrested a 44-year-old homeless man in connection with the murder.

At the heart of the homeless problem is Malmö’s sheer lack of rental properties, leaving prospective tenants on a waiting list of years to get an apartment. Local authorities say they have 700 people who could move into a flat tomorrow – if there were any available.

As a result Malmö, municipality paid out 168 million kronor ($26.5 million) – half a million a day – on homeless accommodation last year. Money which the authorities freely admit could be better spent on tackling the housing crisis.

“It’s an awful lot of money and there is so much we could with it to help the most needy,” says Karin Andersson of the city’s department for individuals and families.

“Today, in principle, anyone can become homeless. However, the responsibility to solve the housing problem ends up with social services. It’s all about the lack of apartments in Malmö. We need considerably more small flats in the city,” she adds.

There is no shortage of tragic stories from people about why they ended up at the soup kitchen needing help. One told organizer Janni Bjödstrup that she had suffered a stroke and was evicted from her home while she was in hospital. Still in recovery and without any family support, she remains homeless.

Such stories are forcing locals and newcomers to Malmö to re-evaluate their impressions of Sweden.

“I was shocked to see so many homeless people in Malmö as it is not something you imagine would happen here,” says South Korean exchange student and volunteer Song Yi-Yi as she serves out warm soup.

“In Korea we have the same problem but there’s a real ‘out of sight and out of mind’ mentality. When I go back I’m going to help out more. When I came to Malmö I certainly didn’t think I’d be telling people back home about the homeless problem but there is poverty no matter where you go.”

For a country that prides itself on its vast social safety net and high standard of living, the fact remains that new soup kitchens are being started up across Sweden.

Homelessness, on the current scale at least, is likely to remain according to soup kitchen organizer Janni Bjödstrup.

“In the short-term, soup kitchens can provide a temporary solution but in the long term the government and ruling authorities need to fully address the problem,” she tells The Local.

“Eliminating the prejudice is a start and the only way to do that is meet the people who are experiencing this every single day.”