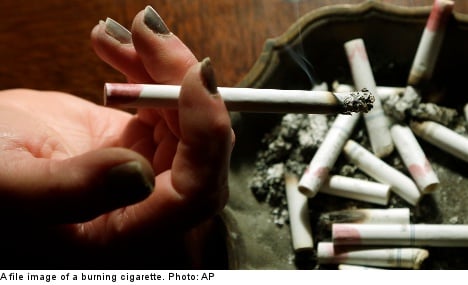 In an opinion article published on Wednesday in the Dagens Nyheter (DN) newspaper, the four authors argue that a total ban on smoking would “prevent many human tragedies” associated with smoking tobacco products.

The authors cite New Zealand and Finland as role model countries where parliaments have decided to work toward a complete ban on smoking.

“We therefore urge the Riksdag to implement a decision that totally bans smoking from 2025 and works toward a gradual phase-out until then,” write Ola Brodin of the Swedish Lung Cancer Study Group, Tommy Björk of the lung cancer patient advocacy group Stödet (‘Support’), Gunnar Wagenius of the Swedish Cancer Society’s (Cancerfonden) lung cancer planning group, and Roger Henriksson of the Swedish Association of Oncologists (Svensk onkologisk förening).

“Thereafter it should no longer be legal to import, distribute, or sell cigarettes or other tobacco products meant for smoking.”

While the authors admit that such a ban amounts to an infringement on personal privacy, they argue a ban is justified considering “the enormous damage to society” caused by smoking and the fact that it is the “cause of a huge number of personal tragedies”.

However, the authors stop short of advocating for a ban on all tobacco products, explaining that prohibiting smokeless tobacco such as Swedish snus would go too far.

“We’re no friends of snus, but we don’t want to infringe on people’s privacy more than absolutely necessary,” they write.

The authors also suggest a number of measures to reduce smoking even further in the lead up to the 2025 ban including the use of neutral packages with prominent anti-smoking warnings and free programmes to help people quit smoking.

Another suggestion is to limit where cigarettes can be sold, with the authors proposing that they only be sold in pharmacies.

“Our aim isn’t to make life hard for heavy smokers, but rather to get them to switch over to other forms of nicotine,” they write.

“We’re frightened by the incredibly large risk that smokers (active and passive) have of being hit with lung cancer and other serious illnesses.”