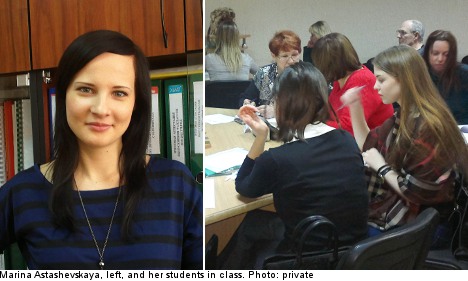 Marina Astashevskaya may not have perfect Swedish herself, but when it comes to her students’ learning, she is a perfectionist.

“Do you say ‘He’s a widower or he’s widowed’ in Swedish?” she asks on the phone from Kaliningrad.

“They both look right. I’m not going to say it to my students unless I’m certain it’s correct.”

Since February, Astashevskaya has been meticulously teaching the finer points of Scandinavia’s most widely spoken language to a class of almost 30 Russians.

But why are dozens of local Russians so keen to learn a language that’s essentially only spoken by nine million people in one cold country to the north?

“There’s a whole range of reasons why they want to learn Swedish,” the 27–year-old teacher explains.

“Some are older grandparents with family over in Sweden. Their children have married Swedes and have had kids of their own. But these kids don’t always end up learning Russian.”

As a result, there is a communication barrier between the Russians and their own grandchildren, Astashevskaya explains.

“So some of my students want to learn Swedish as it’s the only way they can communicate with their grandchildren.

“But it’s not just for family. Some of the students want to be travel to Sweden and actually converse with the shopkeepers, the locals. And some just find the language exotic.”

But Swedish language courses abroad don’t stop in just Kaliningrad. Students around Europe are flocking to similar classes, according to Erika Lyly, a language advisor and linguist from the Swedish Language Council (Språkrådet).

“Universities are really into teaching Swedish right now. There’s a strong background in Swedish culture to thank, with (author) Astrid Lindgren and (director) Ingmar Bergman of course,” she tells The Local.

“But it’s also become a language for people wanting to talk business with Swedes. Another benefit is that Swedish is also understood in Norway, and some parts of Finland.”

When told of the Kaliningrad classroom, Lyly says the story is “moving”, and that it’s the first time she’s heard of older students wanting to learn Swedish to bridge a love-refugee gap.

“But I do know that Swedish lessons are getting more and more popular in Russia, with university courses in both Moscow and Saint Petersburg. Many people learn for business purposes, but there are also a lot of Russians who get married to Swedes and want to learn the language before they come here.”

Astashevskaya herself is a fan of the vernacular, and picked it up almost fluently over eighteen months while exploring and studying in eastern Sweden.

“Swedish sounds like a melody when you listen to it, and it was easy for me to learn because I already know English and German,” she explains.

Now back in Kaliningrad, a Russian exclave between Lithuania and Poland on the Baltic Sea, the 27-year-old runs the classes voluntarily, with no funding for any official textbooks.

While she occasionally asks students for some small change to cover printing costs, Astashevskaya runs the whole thing in her own time and mostly from her own pocket. She puts together worksheets and even audio tapes from memory, online courses, and her extensive class notes from her own time in Sweden.

“My style involves a much more creative approach and the students respond really well to it,” she beams.

The other students in her class, which is held twice a week in a library in central Kaliningrad, range in age from as young as 13 to as old as 65.

She even teaches a mother and daughter who are both obsessed with what they call a Nordic “paradise” and who plan to eventually relocate to Stockholm. It’s only a matter of time to determine if they can get residence permits, Astashevskaya explains.

While the 27-year-old teaches students who don’t know a word of Swedish, she finds that the class members are all quick to learn.

“They want to speak a third language. They usually speak English, German, or Polish and want to use their time to pick up another one.”

The best thing about her class, according to Astashevskaya, is that the students are motivated more than the typical language student in Sweden. They have come by choice, she says.

Astashevskaya, meanwhile, who doesn’t pocket a single rouble for her work, admits that she heads home after each lesson with a smile on her face.

“I’ve always enjoyed helping people, even with the knowledge that I’m not getting anything for it,” she tells The Local.

“But knowing that these Swedish lessons may help my students in the future in some way is enough to leave me satisfied.”