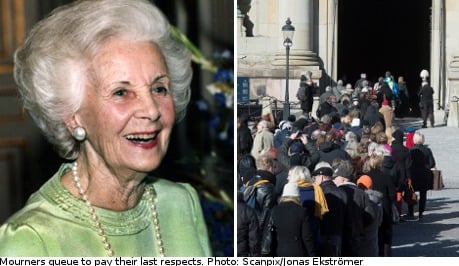 The funeral will be televised on Sveriges Television from 1pm when the ceremony at the palace church in Stockholm begins.

The Royal Court has announced that three clergymen will officiate at the service: Bishop emeritus Lars-Göran Lönnermark, Pastor Michael Björkhagen and Nicholas Howe of the Church of England.

The ceremony is scheduled to finish at around 2pm and Princess Lilian’s coffin will then be taken in a procession through central Stockholm winding north to her final resting place at the royal cemetery in Haga.

The motorcade route will begin at the palace, head out along Slottsbacken, Skeppsbron, Slottskajen, Norrbro, Gustav Adolfs torg, Regeringsgatan, Hamngatan, Sveavägen, Norra Stationsgatan, Norrtull and then into Haga park via the southern gate.

Members of the public have been given the opportunity to leave flowers at the southern arch on Slottsbacken by the palace.

“This can be done until 11.30pm,” said Royal Court information officer Ulrika Naslund.

Flowers from members of the public will however not be arranged inside the Royal Chapel.

Princess Lilian’s final resting place will be open to the general public for a few hours around midday on Sunday, and on Monday.

A large number of people thronged to the palace church on Friday to see the lying in state of the popular princess, who died peacefully on March 10th in her home in the Djurgården area of the city.

Lilian’s coffin was wrapped in the Swedish flag and had the Princess Eugenie crown on the lid, and with a around six guards of honour in attendance.

Princess Lilian was married to the king’s uncle, Prince Bertil, who died in 1997.