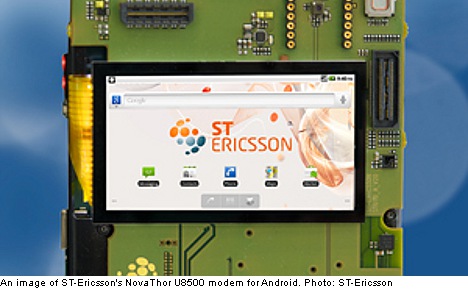 The mobile technology venture between Ericsson and STMicroelectronics, ST-Ericsson, said Monday it would axe 1,600 jobs after splitting the operation.

As the two companies prepare to dissolve the joint venture, Ericsson announced it will take over the design, development and sales of future LTE multimode wireless modem products, while STMicroelectronics will maintain responsibility for existing ST-Ericsson products, as well as certain assembly and testing facilities.

The formal transfer of assets from ST-Ericsson to the respective parent companies is expected to be completed during the third quarter of 2013.

Ericsson CEO Hans Vestberg said the move allows the Swedish telecom equipment maker to develop a “highly focused ‘thin modem only’ operation”, explaining that the products are expected to maintain a leading position in the rapidly growing market for smartphones and tablet computers.

“Ericsson continues to believe that the thin modems hold a strategic value to the wireless industry,” he said in a statement

STMicroelectronics expected to incur a $350-$450 million cost this year for the split.

ST-Ericsson last year had a headcount of 5,000, mostly in Sweden, Germany, India and China.

Following the split, 1,800 of ST-Ericsson’s employees will move to Ericsson, while 950 will end up with ST.

ST-Ericsson has never turned a profit since being formed in 2009, and has weighed on the bottom line of its struggling Swedish parent, which in November said it would cut almost 10 percent of its workforce.

Carlo Ferro will replace Didier Lamouche as chief executive to oversee the unwinding of the venture, the company said.