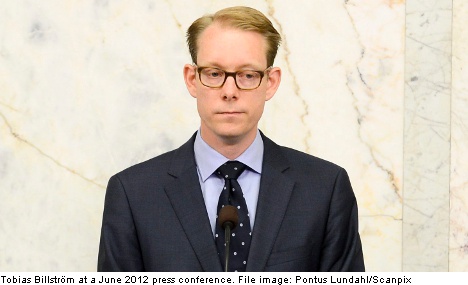 In an interview published in the Dagens Nyheter (DN) newspaper, Billström offered his comments about people who help those who’ve had their asylum requests rejected stay in Sweden.

The comments, published as part of a wider interview about rejected asylum seekers who remain in Sweden illegally, were quick to prompt harsh criticism from several quarters.

“Migration minister: ‘blonde and blue-eyed don’t hide refugees’. What sort of view of humanity is that?” she wrote on Twitter.

“I’m worried about the direction the Moderates seem to be going these days. For example, talking about ‘reducing immigration volumes’. That goes totally against the agreement we have to make migration policy more open and humane.”

The head of the youth wing of Billström’s own Moderate Party also slammed the him for expressing himself in an “unacceptable” manner.

“I really don’t understand what hair and eye colour have to do with any of this,” Erik Bengtzboe, mead of the Moderate Party youth wing MUF told the Svenska Dagbladet (SvD) newspaper.

“I think he needs to take a close look and think about what he says, how it’s interpreted, and apologize.”

Another Moderate politician, Oliver Rosengren, who serves on the local council in Växjö in south central Sweden called for Billström to resign.

“I’m so ashamed I want to vomit over your bizarre statements,” Rosengren wrote on Twitter.

“I’m booking a train ticket to Stockholm. If Billström hasn’t resigned before the day is over I’m going to drag him out of Rosenbad,” he continued, using a common term to describe Sweden’s government offices.

“I’m concerned now that statements going in all directions threatened the deal. Both the Green Party and from the migration minister have made statements that risk the credibility of the agreement,” Björklund told the TT news agency on Monday.

Despite withering criticism from nearly all parts of the political spectrum, Billström found sympathy for his statements from the anti-immigrant Sweden Democrats, with Kent Ekeroth, the party’s judicial policy spokesman, hailing the minister’s “common sense”.

“So he likes mass immigration, but he’s got the right attitude,” Ekeroth wrote on Twitter.

“Efforts to hide people without permits often doesn’t involve citizens driven by goodwill. It may involve networks who earn lots of money by letting these people work for low wages under slave-like conditions,” Åkesson said in a statement.

With criticism showing no sign of abating, Billström was forced to issue an apology around lunchtime on Monday.

“I want to apologize for what’s in today’s DN. I understand that people have been upset over this formulation,” he told TT.

He added that he wasn’t misquoted in DN, explaining it’s difficult to describe Sweden’s “shadow society” and that he wanted to highlight the risks faced by people in hiding.

When questioned about his use of “blonde and blue-eyed” in his description, Billström confessed he “expressed himself poorly”, but refused to admit that it was a racist statement, as some critics had charged.

“I can say that formulating myself in the way I did, that leads in the wrong direction and I’m sorry for that,” he said, nevertheless emphasizing the need to talk about Sweden’s “shadow society” and the dangers that come with it.

“It’s politically relevant to talk about these issues and that was the main point of the interview. But I expressed myself stupidly in this article. Because appearance isn’t relevant.”

He added that he fully backs a government bill that would give the children of undocumented migrants and unaccompanied minors the right to attend school in Sweden, something that the article in DN indicated he didn’t support.