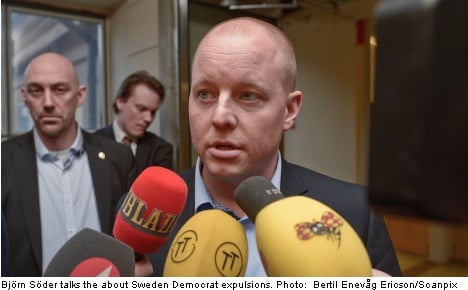 “I’m surprised that the party made such an unwise and unfounded decision,” Patrik Ehn, who was forced out of the party following a 14-3 vote, told the TT news agency.

The announcement comes following an extra meeting of the party’s governing board as part of an initiative launched in October by party leader Jimmie Åkesson to “clean up” the party’s image.

“We have to put our foot down and state that enough is enough. We need a major clear out,” Åkesson told the TT news agency at the time, explaining the party was launching a policy of “zero tolerance”.

Following a day of closed-door meetings, the party revealed on Monday afternoon that twelve people had been asked to leave the party, including Ehn, a high-profile politician from Gothenburg who last week told the Expressen newspaper there was “not a chance” he would be dismissed.

But the Sweden Democrat leadership explained that Ehn, who according to the anti-racist magazine Expo was an active member of the neo-Nazi Nordic Nationalist Party (Nordiska rikspartiet) in the 1980s, remained too close to the neo-Nazi movement and its views.

“After careful consideration, the party’s governing board has concluded that Patrik Ehn’s ideological home isn’t with the Sweden Democrats and that he therefore can’t continue to be a member,” the party said in a statement, adding that Ehn’s efforts to abandon extremism lacked credibility.

“The dismissal is based on the governing board’s collective assessment about Ehn’s political background in Nazi and extremist organizations in combination with a long series of statements and incidents.”

Ehn, who sits on the local council in Gothenburg as well as in the Västra Götaland County Council, belonged to what had been called the Sweden Democrats’ “Bunker-wing”, a faction within the party that supported a more nationalist line, while Åkesson has emphasized the party’s social conservatism.

Ehn told TT the accusations that he had ties to the neo-Nazi National Democratic Party of Germany (NDP) are “unfounded”.

Despite the strong support he has among Sweden Democrats in and around Gothenburg, party secretary Björn Söder downplayed chances that the housecleaning would lead to a more open split within the party.

“I don’t think there will be a split in the party, but it remains to be seen if there will be party colleagues who follow Patrick Ehn,” Söder told TT following Monday’s announcement.

“But when everyone understands the reasons behind the expulsions, I wouldn’t be surprised if they leave the party.”