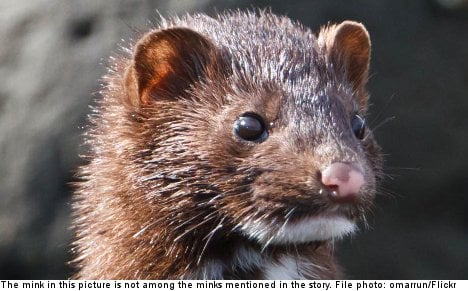 The flyby occurred over a mink farm in Svenljunga, southern Sweden, during the military training exercises that took place last summer.

When planes flew past at low altitudes, the adult minks became so terrified that they turned on their young and bit them to death.

Between 500 and 600 minks were killed in the frenzy in which the young pups weren’t eaten but fatally bitten by the frightened adult minks.

Following the grisly discovery of hundreds of dead minks, the farmer contacted the Armed Forces and demanded financial compensation for the dead animals.

The Swedish Armed Forces have since apologized for the incident, and agreed to pay for the damages.

While exact compensation details have not yet been settled, the farm owners have sent invoices detailing their losses to the Swedish Armed Forces. An exact price is expected to be determined in the coming weeks.

A mink is a carnivorous, semi-aquatic mammal. It’s fur is highly valued and is often used to make clothing.