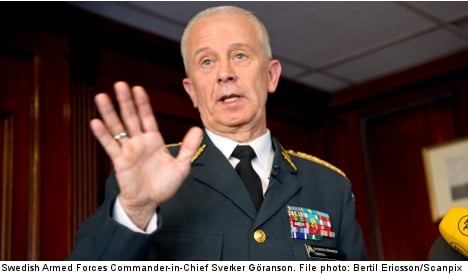 “In an environment like this the interpreter is an absolutely vital part of the operation… If we going to be able to work and recruit in the future, in whichever country, interpreters must feel that we take care of them,” he said to the Dagens Nyheter (DN) daily.

Speaking just days after returning to active duty following a period of stress-related sick leave, Göranson argued that local staff engaged by the military face the prospect of retribution from Taliban.

Some 24 Afghan interpreters working with the Nato-led International Security Assistance Force (ISAF) applied for asylum in Sweden in the summer 2012 but were told that applications must be made individually and in Sweden.

Migration Minister Tobias Billström at the time ruled out that “employees of the Swedish state would be given preferential treatment” and that the cases would be considered according to the standard criteria.

Just prior to his period off sick, Göranson courted controversy after a statement claiming that Sweden could only defend itself for one week if it came under direct attack.

The statement led to a security probe by the Swedish Security Services into whether Göranson’s statement constituted a breach of national security.

His assessment has however since been supported by an academic research report from the Royal Academy of War Sciences (Kungliga Krigsvetenskapsakademin) and sparked a debate about defence funding.

The defence forces maintain that a further 4 billion kronor ($620 million) is required to keep the Swedish military ticking along, while the government is seeking to cut the defence budget by 500 million kronor.

The Commander-in-Chief returns from his visit to Afghanistan on Wednesday and is due to meet with defence minister Karin Enström in Skövde in western Sweden.