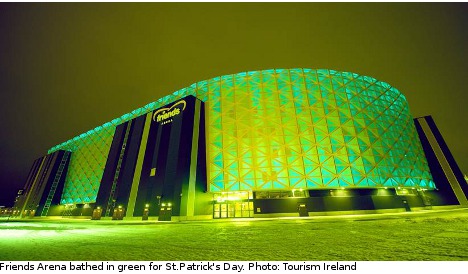 “Opening the roof would be hard to understand if we want to keep the pitch in good shape and have normal playing conditions,” FIFA wrote in statement to the Aftonbladet newspaper.

The comments come in the wake of an icy dispute between the Irish and Swedish football federations about whether or not the new 50,000-seat stadium’s retractable roof should be open or closed for Friday’s match.

On Monday, Trapattoni expressed his desire to play under the stars in Stockholm, citing concerns that having Friends Arena’s retractable roof closed would provide an unfair advantage to the home team.

“When it is closed it has an echo and that is no good. It is too loud,” he told reporters, downplaying concerns that below zero temperatures would be a problem for his players.

“It is not cold on the pitch, that is what is important,” he added.

“It’s for the spectators that it will be cold.”

Football officials in Sweden, however, argued the roof should be closed.

“I’m not worried. I think it’s going to be closed. Anything else would be an illogical decision.”

Richt promised to seek a ruling from FIFA on the matter. On Wednesday, the international footballing body offered its position via an email sent to Aftonbladet.

“At the moment, the roof is closed and the weather conditions are very adverse, with ice and snowfall and extreme temperatures. The weather forecast up to the match doesn’t seem to show any signs of drastic improvement in this respect,” FIFA wrote.

“Opening the roof would be too dangerous (it’s currently covered with ice and snow) and certainly difficult to understand if we want to keep the pitch in good shape and have playing conditions that are normal.”

“It’s good that common sense has prevailed,” he told Aftonbladet.

Stockholm and Ireland square off on Friday with kickoff scheduled for 8.45pm.