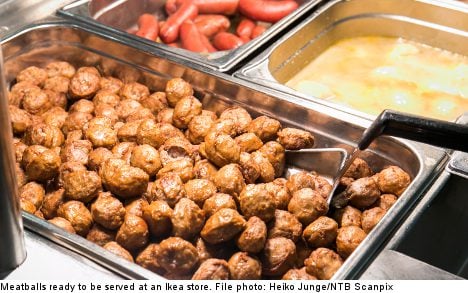 “From now on we are doing DNA-tests on all meat at three different levels. At delivery, under production, and when the meatballs are finished. The number of suppliers has shrunk from 15 to seven,” Ikea Foods CEO Edward Mohr told the TT news agency on Thursday.

Mohr added that the new meat in Ikea’s Swedish meatballs currently comes only from Germany, but that Sweden and Ireland will soon serve as supplying countries as well.

The news comes three weeks after Ikea banned the sale of meatballs in stores across Europe after tests in the Czech Republic found traces of horsemeat in the Swedish retailer’s meatballs.

The findings were later confirmed by tests carried out in Sweden by Ikea meatball supplier Gunnar Dafgård AB.

Mohr refused to divulge the amount of horse-tainted meatballs Ikea still had in stock, saying only it was “quite a lot”.

When asked what Ikea planned to do with the horse meatballs, he explained the company is looking into whether it can follow in the footsteps of Swedish foodmaker Axfood, which announced earlier this week it was donating five tonnes of horsemeat-tainted frozen lasagne to help feed Stockholm’s homeless.

“We need to see how it would work from a legal and regulatory perspective,” Mohr told TT.

He added he would “absolutely” eat Ikea Swedish meatballs with or without horsemeat.

“I love them. It’s important to remember that there wasn’t anything wrong with the actual product, but rather that they were improperly labelled,” said Mohr.

It remains unclear what Ikea founder Ingvar Kamprad thinks about the episode.

“To be honest, I don’t know. I haven’t spoken with him,” Mohr said.