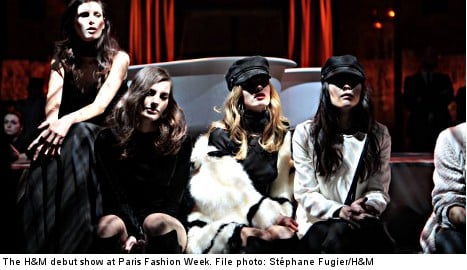 “Sales in the first quarter did not reach our expectations,” chief executive Karl-Johan Persson said on Thursday.

The company saw its net profit shrink by 12 percent in the December to February period, to almost 2.5 billion kronor ($380 million).

Sales inched up just 2 percent, to 33 billion kronor. Excluding calendar effects and exchange rates, sales rose by 8 percent, but the company was hit by “the continued strengthening of the Swedish krona against most sales countries’ currencies”.

H&M said it was being hit by the global economic crisis and weather.

“The first quarter has been characterised by the continued challenging situation for the fashion retail industry in many of our markets mainly due to a continued tough macro-economic climate,” the statement read.

It also said “unfavourable weather” had worked against its usually buoyant sales.

Looking ahead to the second quarter, H&M said that cold, wintry weather across much of Europe and North America in March has “delayed the start of the season for the spring collection” and “had a negative effect on sales.”

Instead of retreating to lick its wounds, the company instead said it would ramp up its expansion rate. H&M now plans to opening some 350 new stores instead of the 325 previously planned.

“Most new stores during 2013 are planned to open in China and the US. There are also still great opportunities for expansion in markets such as Russia, Germany, the UK, Italy, Poland and France,” it said.

H&M currently has 2,818 stores worldwide, 13 percent more than a year ago.

It said one of its new labels, the clothing and accessories boutique & Other Stories, had opened successfully in London in March and on the internet, with initial sales exceeding forecasts.

Investors welcomed the news, with the share price gaining 1.85 percent in midday trading on a Stockholm exchange down by 0.79 percent.