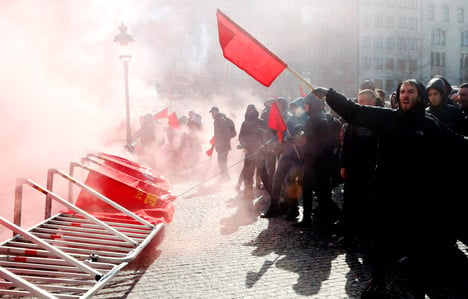 “There were angry skirmishes after the anti-racists marched from Möllevångstorget square to the Stortorget square around noon, a lot of people seemed ready for a fight,” said The Local’s Patrick Reilly from the scene.

“They were pushing over barricades, setting off flares and some threw bottles, and went up against the police,” he said.

“There was also the odd snowball tossed at police.”

An officer on the ground said there were “in excess” of 100 police present, while our reporter numbered the actual SDL members at only about 20.

“The SDL were waving a Swedish flag on their way to the square and gave the counter-demonstrators the finger,” Reilly said.

The Local’s reporter numbered the counter-demonstrators to just shy of 600. Some demonstrators used a Eurovision awning on the square to beat out a rhythm, which alongside the chants “No racist on our streets” drowned out most of the words from the SDL speakers.

One banner hoisted above the march read “No Breivik Soldiers on our streets,” according to the TT news agency.

Mounted police, police dogs and helicopters were part of the security measures.

“The police said they were prepared because there was a lot of talk on Facebook and Twitter before hand,” Reilly said.

The SDL is a sister group of the anti-Muslim English Defense League (EDL) and was set up in 2012 by a 23-year-old from Gothenburg.

In August 2012, SDL invited the EDL to Sweden for a rally.

Stockholm was chosen as a location because of the actions of the Iraqi-born Swede Taimour Abdulwahab who botched a suicide bombing attempt in Stockholm in December 2010.

The rally was called off as counter demonstrators clashed with mounted police, scenes echoed on Saturday in Malmö.

The EDL was cited in the writings of Norwegian terrorist Anders Breving Breivik. He himself claimed he had “close ties” to the EDL and he had 600 EDL members as Facebook friends.

A previous version of this article misspelled skirmishes, which was edited on March 24th, 2012.