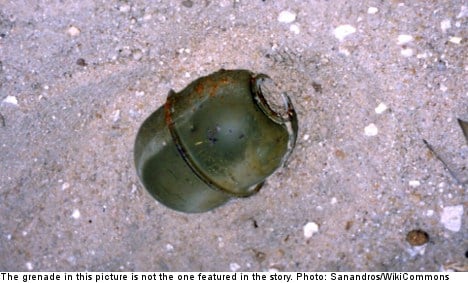 Staff at the recycling station called the police after concluding that the 17 centimetre item deposited by the pensioner appeared to be ammunition, according to a statement on the police website.

Bomb technicians were swiftly dispatched to the location and were able to conclude that item was ammunition suitable for a grenade-launcher.

The grenade was removed from the recycling depot for destruction.

Since March 1st a weapons amnesty has been in place in Sweden allowing residents to turn in their weapons over to police without facing any criminal penalties.

Several other grenades, including one dating back to World War 1, have emerged and been handed over in the past month.

In early March an 87-year-old man caused panic in a police station in Vällingby in western Stockholm when he walked in carrying two grenades.

After evacuating the police station, experts were able to conclude that the ammunition was inactive.

Police issued a statement after the incident calling on members of the public to call the authorities if they find grenades or other ammunition in the cupboard as there is a risk of explosion if transported.