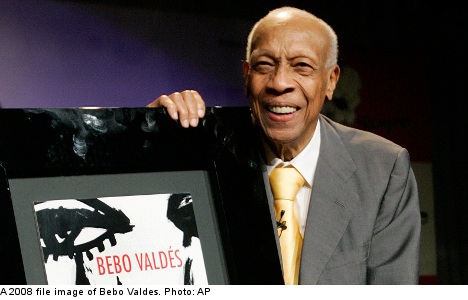 “He died this evening in hospital, his two sons were with him,” a close friend and neighbour who was with him when he passed away, Heri Ekelund, told AFP.

Valdes began his career in Havana’s nightclubs in the 1940s. Influenced by American jazz, Cuban melodies and African rhythms, he became the main pianist and arranger for the house orchestra of Havana’s famed Tropicana night club in 1948, attracting Cuba’s top singers and orchestras.

He was active as a bandleader, arranger and composer throughout the 1950s.

But a year after Fidel Castro’s revolutionary government took over Cuba in 1959, Valdes defected to Mexico, leaving a wife and five children behind.

He eventually settled in Stockholm in 1963, where he married a Swedish woman and started a new family.

In Stockholm, he worked as a lounge pianist in hotels and bars to support himself, content just to tinkle the ivories.

“If you are a musician, and you do one thing, you should enjoy what you do,” he told US National Public Radio in a 2006 interview.

“This is my profession and it is my hobby. And I live in love with what I do. In those years in Stockholm, even if I wasn’t successful, I did it because I liked it. And I would keep doing it until I die,” he said.

After a long break from recording, in 1994, at age 76, Valdes came out with the CD “Bebo Rides Again”, where he played piano and composed eight numbers and arranged 11 songs.

The album breathed new life into his career, and he went on to win a handful of Grammy awards.

In the last years of his life, he left Sweden to live in Spain, but had returned to Sweden about a month before his death, Ekelund said.

He is the father of acclaimed pianist and bandleader Chucho Valdes, from his first marriage.