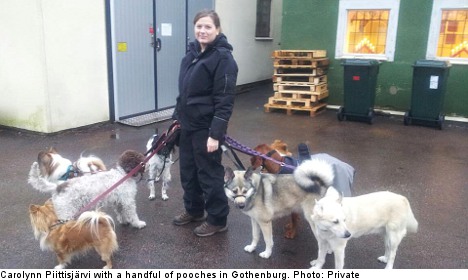 Carolynn Piittisjärvi came to Sweden after meeting her now-husband through the online game Defense of the Ancients (DotA), a multiplayer online game.

Three years, a pet pooch, and one brainwave later – the Texas-native runs a doggy daycare in central Gothenburg, the Hundstjärnan (“The Dog Star”).

But running a canine daycare was never the plan when she first arrived in Sweden, according to Piittisjärvi.

“After I learned Swedish at SFI, I took an internship (praktik) at a café with the intention of eventually opening my own American-style coffee shop. It turned into a valuable lesson – I realized it wasn’t for me at all,” she tells The Local.

Instead, Piittisjärvi had her moment of clarity while walking a friend’s dog.

“I realized that there was an opportunity to make some good extra money by walking more people’s pets. Soon, I was making contacts in the pet world and had a load of loyal customers,” she explains.

Having studied business management back in Texas, it didn’t take long for the 25-year-old to take the idea by the leash and move things up a notch.

“I started reading up on dogs and came to the conclusion that people really wanted more than just a walker. They wanted extra care,” she says.

IN PICTURES: Meet some of the guests at the Gothenburg doggy daycare

Piittisjärvi pooled her savings and bought a place in December that could serve as a full-day home-away-from-home for her canine companions – just like a daycare for children but for dogs, she explains.

Four months on, the business is thriving.

“We have 25 dogs here now, there’s always something to do,” she says, as a dog starts barking in the background.

“Dog daycares are becoming more and more popular in Sweden and worldwide, and people are starting to pay attention to the laws. A lot of people don’t know that it’s actually illegal to leave a dog at home alone for more than six hours in Sweden for example.”

But does a day of care actually involve at the centre?

“Well, we take them for a walk in the morning and again in the afternoon. I’ve taken as many as twelve at once, but it’s usually around eight.”

While some people have called her a “dog whisperer”, Piittisjärvi is quick to brush off the label and admits that she simply enjoys a job that involves so much play.

“I couldn’t be happier. The work is so therapeutic, but it’s also a wonderful challenge trying to find a way to mesh all these animals’ different personalities,” she says.

But it’s been a long road for the Texan, and she’s learnt a lesson or two over the past three years.

“If you think you have an idea that provides something unique for many people, then you should go for it. If it means you have to live minimally so you can save money then you’ve got to just put up with it.

“A lot of people jump into things too fast here, you can’t feel bad about rejection, you have to simply take it in stride. I was rejected about fifteen times when I was looking for a place for this daycare – but I kept pushing for it because I truly believed in the idea.”

As for the future, Piittisjärvi sees big possibilities for her business.

“Ideally, I’d love to open another place in Gothenburg and then see what happens from there,” she tells The Local.

“There is a big future in dog care.”