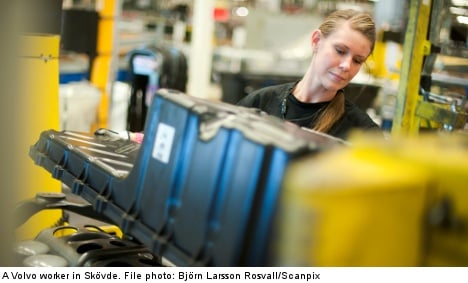 Amid the alarm bells about youth unemployment, the Swedish Trade Union Confederation (LO) on Monday announced that access to job insurance among Sweden’s young has dropped by 76 percent in less than a decade.

Only 10 percent of jobless young Swedes get job insurance today, its statistics revealed. The report compared figures from 2006 and 2012 compiled from Statistics Sweden (Statistiska centralbyrån) and looked at Swedes aged 15-24, not including full-time students.

“It’s terrible that job insurance has been gutted to the point that 76 percent fewer young people have access to it,” LO spokesman Dan Lindqvist Dahlin told The Local.

“Today you need to have been working for twelve months rather than six, of which you need to show that in a half-year period you have worked a minimum of 80 hours a month compared to the previous 70-hour requirement,” Lindqvist Dahlin said of labour reforms enacted in 2007.

The chickens are now coming home roost for Sweden at a time when unemployment and underemployment are affecting younger workers in particular, according to the union.

“This 80-hour requirement hits the young hardest as many of them have no choice but to work part-time,” he said.

The report also found that unemployment in this age bracket had soared by 18 percent compared to 2006.

At the same time, many more young Swedes face “underemployment,” when access to full-time work is not available. The report found that there were 76,800 underemployed youth seven years ago, a number that had hit 93,000 by last year.

Union spokesman Lindqvist Dahlin said foreign-born workers were especially vulnerable if information about their rights did not reach them.

“If you come here as someone’s girlfriend or boyfriend, you usually have a support structure and people around you to explain the Swedish system,” Lindqvist Dahlin told The Local.

“Labour migrants, however, need to get information from the Migration Board, from the unions and of course the employer, which hasn’t always worked.”